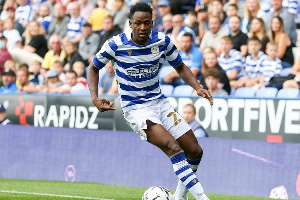 Ghana defender Baba Rahman says Reading are ready to conquer West Brom as the two teams prepare to face off in the English Championship on Saturday afternoon.

The left-back knows the Baggies, who sit third in the table, will pose plenty of threats, but insists the Royals have nothing to fear having already beaten the likes of Fulham on the road this season.

He said: “It’s been a great week, we’ve had some intense sessions and it’s been interesting to have a week without playing.

“We’re really positive, after the win at Swansea, and the draw at home, even though we didn’t get the three points against Hull, it’s been positive and we’re just trying to build on this.

“We know it’ll be a big test, especially away. West Brom are a good team, we know that, the table says that too, but we’ll give it our all for the three points.

“We’re trying to pick up where we left off. We’ve got a good team and a good squad, so if everything goes well, we’re capable of a result.

“It’s an important period, the points differences are not that big and we can still climb the table.”

On settling in at Reading, Rahman revealed he’s loving being part of the team, and that he’s grateful for the regular game time he’s getting in the blue and white hoops.

He finished: “It’s been great, the lads are good and I’ve enjoyed myself here so far. I’m very grateful and happy for the game time.

“I appreciate it a lot as that’s what I needed, and the opportunity means a lot.”

Rahman is a Chelsea player, signing a three-year extension before joining Reading on loan.

He has played 16 games thus far.