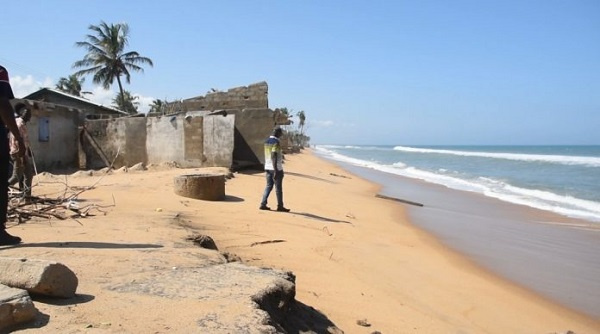 Effect of a tidal wave

The National Disaster Management Organization (NADMO) has revealed that most of the people whose homes were destroyed by the tidal waves in the Keta Municipality of the Volta Region are rebuilding their structures at the same location.

About two thousand inhabitants were displaced in Keta Municipality alone in the recent tidal waves which hit the coastal towns of the Volta Region.

The areas were Ketu South, Keta and Anlo, in which thousands of inhabitants were displaced.

Speaking in an interview with 3FM’s Sunrise on Wednesday hosted by Alfred Ocansey, the Keta Municipal NADMO Director, Godknows Bleboo, said that “many of them are still in fear of other tidal waves because for many years…almost 17-years now, Keta has not experience this before so this one has been a surprise to them.

“They are still exposed to the tidal waves but many have reconstructed their homes and they are back at the same places because there is no other land that they can go and rebuild”.

“They have no choice and NADMO don’t have any land to give to the people for them to go and rebuild. Many of them are fisherfolks. They must go to the sea so if we put them in the forest, who will feed them. The only solution is sea defense.”

Meanwhile the government is taking steps to deal with the cause of the tidal in Keta and other coastal areas in the country.

Finance Minister Ken Ofori Atta in announcing modifications in the 2022 budget statement at a press conference in Accra on Monday December 6, said “In respect of the unfortunate tidal waves which rendered about 3,000 people homeless in Keta, we shall make the necessary budgetary allocations of at least GHS10 million to complete the Feasibility and Engineering studies for the coastal communities adversely affected.

“We will broaden the scope of the study to consider a more comprehensive solution to protect Ghana’s 540 Km of coastline,

including the 149 Km between Aflao and Prampram. Meanwhile, NADMO has responded to the humanitarian crisis created by the tidal waves on the Keta coastline.”