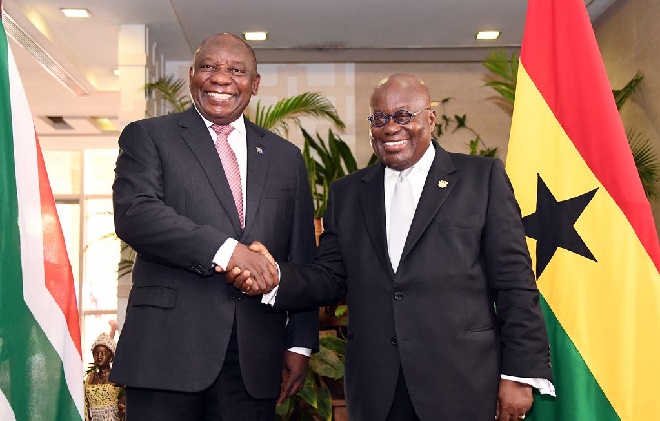 PRESIDENT AKUFO-ADDO and South African President, Cyril Ramaphosa, thinks the best way for Africa to develop is to intensify trade among countries on the continent.

Speaking at the Ghana-South Africa Business Forum in Accra Sunday to climax the two-day state visit of the South African leader to Ghana, President Akufo-Addo noted that “There is one set of data that for me, puts together everything that we have been speaking about here. Sixteen percent (16%) of Africa’s combined Gross Domestic Product (GDP) derives from inter-African trade” whilst “seventy-two percent (72%) of Europe’s combined GDP derives from inter-European trade.”

According to him, “these two statistics tell us everything about the relative economic development of Africa and of Europe. So the need for us to focus on what we can do to push up dramatically intra-African trade is laid bare by these statistics.”

He, therefore, noted that the setting up of the African Continental Free Trade Area (AfCFTA) was a key architecture that has been established to help Africa achieve the high target of intra-trade among itself as has been achieved by Europe.

“If truly we want to generate prosperity on our continent, the success of the AfCFTA is absolutely critical to our capacity to do that; and as God will have it, at this critical moment in our history, the AfCFTA Secretariat is located here in Ghana and the first Secretary General of the AfCFTA, is a South African who has shown a great deal of aptitude and enthusiasm for the work,” he emphasised.

On his part, South African President, Cyril Ramaphosa said Ghana and South Africa, “do need to intensify efforts to build strong industrial bases and expand exports to create more employment opportunities for the people on the continent especially, young people.”

Even though he admitted bilateral trade between Ghana and South Africa was growing and pleasing, the South African leader wanted to see more growth.

“Much as we are growing, I would like to see us grow more exponentially. In 2020, the trade volumes between Ghana and South Africa reached just over 14 billion,” he said.

To correct this imbalance, Cyril Ramaphosa said “We need to develop manufacturing capacities on both countries’ sides.”