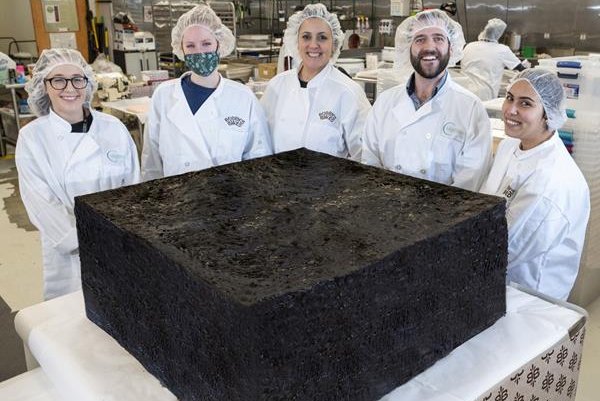 Massachusetts-based MariMed celebrated Wednesday’s National Brownie Day and the launch of its new Bubby’s Baked brand by cooking an 850-pound confection believed to be the world’s largest marijuana-infused brownie. Photo courtesy of MariMed

Dec. 8 (UPI) — A marijuana dispensary in Massachusetts cooked what it claims to be the world’s largest cannabis-infused brownie — an 850-pound THC treat.

MariMed, based in Norwood, celebrated the launch of its new brand Bubby’s Baked by cooking the brownie infused with 20,000 milligrams of TCH, the primary psychoactive ingredient in marijuana.

The brownie measures 3 feet long on each side and 15 inches high. It dwarfs the Guinness World Record holder for largest brownie, a 234-pounder made by Alabama’s Something Sweet Bake Shop in 2013.

But MariMed said the record-keeping agency told the company its brownie would not be considered.

The brownie, which was unveiled to coincide with Wednesday’s National Brownie Day, will be sold to a MariMed medical marijuana patient, Crandall said.