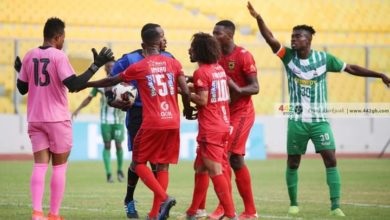 Ghana Premier League side Asante Kotoko have officially logged a complaint against referees who handled their match week 6 game against King Faisal to the Ghana Football Association.

Asante Kotoko lost their first game of the 2021/2022 Ghana Premier League season to King Faisal FC in the Kumasi derby at the Baba Yara Sports Stadium.

The match witnessed several controversial refereeing decisions as Asante Kotoko were denied a goal scored by striker Mfegue Georges, which the assistant referee flagged for an offside.

However, Asante Kotoko have announced that they have logged a complaint against the match officials but left out the details of the complaints.

“We have lodged a formal complaint with the @ghanafaofficial against the referees who officiated our #GPL2122 matchday-6 game against King Faisal in Kumasi last Sunday,” they posted on their Twitter page.