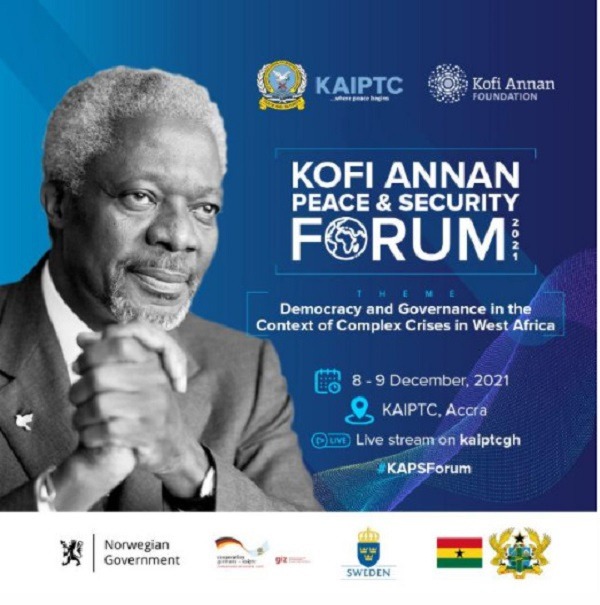 The event comes off from December 8-9

Put together, the six have almost 50-years’ experience in the highest office of their countries. The former West African leaders will be joined by two former prime ministers from Guinea–H.E. Kabine Komara and H.E Lansana Kouyate.

Ghana’s President, H.E. Nana Addo Dankwa Akufo-Addo will be the Special Guest of Honour at the annual event which provides the podium and fodder for political leaders, diplomats, scholars and experts to dialogue and take steps to address nagging security issues threatening peace in Africa.

Also on the list of distinguished personalities are H.E Dr Mohammed Ibn Chambas, ECOWAS Special Envoy to Guinea and Chairman of the KAPS Forum; Mr Elhadj As Sy, the Chair of the Board of the Kofi Annan Foundation; Maj Gen Ofori, Commandant of the Kofi Annan International Peacekeeping Centre; H.E Hannah S. Tetteh, Special Representative of the Secretary-General to the AU and Head of the UN Office to AU; H.E Annadof K.M. Saleh, Special Representative of Secretary-General and Head of UN Office for West Africa and the Sahel; H.E Daniel Krull, German Ambassador to Ghana; H.E Ingrid Mollestad, Norwegian Ambassador to Ghana,; H.E Anna Raas, Deputy Head of Mission, Embassy of Sweden in Abuja and Ambassador Medina A. Wessah, Secretary-General Mano River Union.

The two-day programme is on the theme: ‘Democracy and Governance in the Context of Complex Crises in Africa’.

Organised jointly by KAIPTC and the Kofi Annan Foundation in Geneva, it is the biggest gathering of leaders from the continent in memory of HE the late Kofi Annan, former UN Secretary General, who was a fiery advocate of peace and security across the globe.

Mr. Annan, who led the United Nations from January 1997 to December 2006, had an understanding of peace founded on a holistic vision of societies based on good governance, democracy, and human rights, especially in Africa.

Over the years, KAIPTC, which was named after him, works to promote peace and security across the continent.

The 2021 KAPS Forum is sponsored by the Federal Government of Germany, through GIZ, the Governments of Norway, Sweden and Ghana.