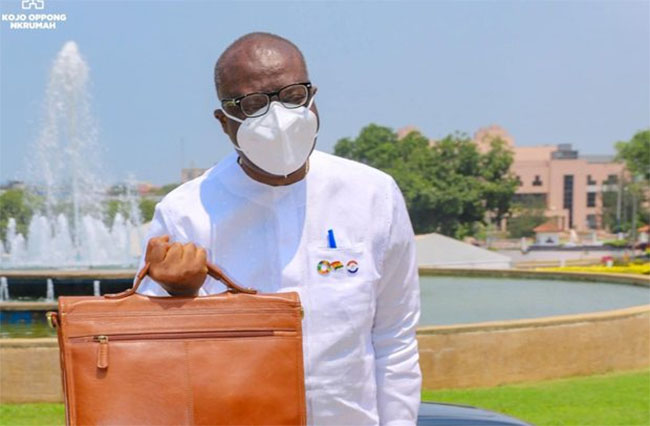 Minister for Finance and Economic Planning, Ken Ofori-Atta, has written to the Speaker of Parliament announcing the government’s decision to modify the 2022 Budget Statement and Economic Policy presented to Parliament on November 17, 2021.

The letter said among other things that, “Mr. Speaker, on Tuesday, November 30, 2021, prior to its approval, and to achieve consensus asked Parliament for an opportunity to effect some modifications to the 2022 budget. I did this after consulting with the President and also to respect his wish that these modifications address the concerns of the Minority Caucus and various other stakeholders, whilst ensuring that a deficit target of 7.4% and a positive primary balance be maintained in view of the nation’s determination to reduce our debt levels, raise adequate revenue to promote youth employment, build infrastructure (especially our roads) and fund other Government obligations, including the Flagship Programmes.”

“With regards to Agyapa Royalties Ltd, we shall amend paragraphs 442 and 443 to take out references to mineral royalties collateralisation. It is important to note that, any reference to Agyapa was for informational purposes, and as such was not reflected in the fiscal framework,” the minister explained.

“In respect of the unfortunate tidal waves which rendered about 3,000 people homeless in Keta, Ketu South and Anloga constituencies, we shall make the necessary budgetary allocations of at least GH¢10 million to complete the feasibility and engineering studies for the coastal communities adversely affected. We will broaden the scope of the study to consider a more comprehensive solution to protect Ghana’s 540 km of coastline, including the 149 km between Aflao and Prampram,” he disclosed.

He said NADMO has responded to the humanitarian crisis created by the tidal waves on the Keta coastline.

On the Aker Energy transaction, the minister said “we shall amend paragraph 829 of the 2022 budget on the acquisition of a stake from Aker Energy and AGM Petroleum by GNPC, to reflect the resolution of Parliament dated July 6, 2021.”

On the benchmark values, the minister said “we shall avert any hardships to importers and consumers while safeguarding the interest of local manufacturing industries to secure and expand jobs for our people,” adding “this administrative exercise which reviewed 43 out of 81 line items, has the objective to promote local manufacturing and the 1D1F policy, including the assembling of vehicles. It is important to note that this adjustment affects only 11.4% of the total CIF value, of which 50% is for vehicles.”

On the E-Levy, the minister said “having regard to its serious fiscal implications, we will continue our consultations with the Minority Caucus in Parliament and other relevant stakeholders with the view to achieving consensus and reverting to the House in the shortest possible time.”

He said they are still holding consultations to enable the government capture all concerns before the implementation of the E-Levy.

The introduction of the Electronic Levy (E-Levy) expected to be at the rate of 1.75% when approved appears to be the main concern of the opposition NDC because they are claiming that when it is approved the E-Levy has the capacity to bring in more money to enable the NPP government to fulfil its manifesto promises and at the same time dwindle the fortunes of the NDC by 2024 when the country goes for general elections.

The E-Levy when passed is expected to come into effect on February 1, 2022, and will attract a charge of 1.75% of the value of electronic transactions, particularly Mobile Money (MoMo) transactions.

Per the arrangement, a sender, and not the receiver, would bear the cost of the 1.75 per cent charge on e-transactions that are above GH¢100.

In the ensuing heat, Minority Leader Haruna Iddrisu hinted that the NDC Minority Caucus would accept the E-Levy if the rate is cut down to 1%.

The Tamale South MP at the 10th anniversary launch of the Ghana Chamber of Telecommunications in Accra on Thursday, December 2, 2021, had said that “A week ago, we said no, we won’t accept E-Levy but having listened to officials in government, including the Minister of Finance, I am convinced to accept a departure from my original no to accepting a one per cent E-Levy.”

The Minority Leader was optimistic that the E-Levy at one per cent was a great contribution to fiscal consolidation and would ensure the economy did not collapse going forward.

Highlighting the E-Levy at a press conference in Accra yesterday, the Finance Minister said that the policy represents the government’s greatest opportunity to broaden the tax net.

“We are determined to enhance domestic revenue mobilisation, the essence of our proposal on the E-Levy is to widen the tax net and generate the required revenue to support entrepreneurship, youth employment to build our infrastructure, especially roads and reduce our debts,” he said.

“Let me emphasise that the E-Levy represents our greatest opportunity to in the medium-term widen the tax base and meet the tax to GDP ratio of 20% as pertains among our peers. To lessen the impact of the E-Levy on consumers and subscribers, especially the vulnerable, we shall work with all stakeholders to ensure that we respond to the need of the people,” he added.

Mr. Ofori-Atta said adequate measures would be instituted to avoid any attempt to the evading of the E-Levy.

“We shall also ensure administrative measures are taken to avoid attempts at evading the E-Levy, The proposed E-Levy is largely progressive …”