Fighting Lomachenko is like fighting for a world title – Commey 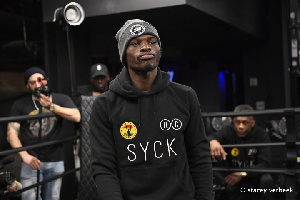 Commey comes up against Lomachenko on December 11

Former IBF lightweight champion, Richard Commey has disclosed that he is approaching his final eliminator fight against Vasiliy Lomachenko like a world title bout.

The Ghanaian pugilist comes up against the pound-for-pound Vasiliy Lomachenko at Madison Square Garden on Saturday, December 11.

A win for Commey will inch him closer to another world title shot after losing his International Boxing Federation [IBF] World Light Title to Teofimo Lopez in 2019.

Commey, who is rated No. 5 by The Ring, has intimated that although he has enormous respect for the Ukrainian boxer, he is the only obstacle standing in his path to becoming a two time world champion.

“If you want to be the best you have to face the best and Lomachenko is certainly one of the best,” Commey told The Ring.

He added that, “It will be an honor sharing the ring with him, but as soon as the first bell goes it will be him standing in the way of my dream to become a world champion again.”

According to the 34-year-old Ghanaian, his showdown against Lomachenko can be described as one of the biggest bouts to climax the boxing calendar.

“It’s like fighting for a world title without the belts,” Commey stated adding, “We are both highly rated in most of the sanctioning bodies and we are headlining at the MSG.”

Heaping praises on the 33-year-old opponent, Commey said, “What can I say that hasn’t already been said?,” he asked.

“His amateur record is unreal and he brought his skills into the pro ranks to become a three-weight world champion. He has it all and is a credit to the sport,”