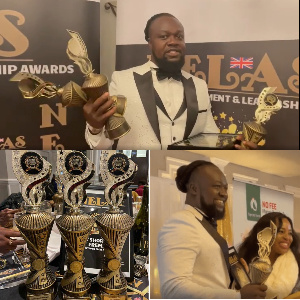 Eddie Nartey awarded in the UK

Eddie appreciates fans for their support

Ghanaian filmmaker, actor and director, Eddie Nartey won three awards to his credit at the just ended Nollywood Entertainment and Leadership Awards UK (NELAS) in the UK on Saturday, December 4, 2021.

The director who recently premiered his movies, ‘Kofi Abrebrese’ and ‘Okada’, on October 29 was awarded the Best Director for his directed film ‘Frema’, Best Short Film for the movie ‘Frema’ and Leadership for outstanding community support.

The actor in a short post on Twitter shared the awards and appreciated all his fans for supporting his works.

“We won Big at Nelas in the UK ???????? •Best Director (Frema) • Best Short Film (Frema) • Leadership for outstanding community support. Thank you to NELAS UK and a big congratulations to EN Academy”, he said.

The awards show saw a lot of filmmakers, celebrities, movie stars, and other industry players in attendance.

Filmmakers, actors and other leaders going home with deserving awards from the various categories they were nominated for.

Nollywood Entertainment and Leadership Awards(NELAS) is an awarding body based in the United Kindom and dedicated to celebrating the achievement of celebrities and leaders from all walks of life.