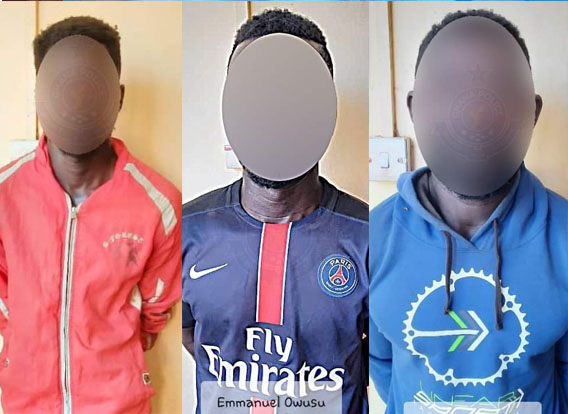 A SUSPECTED robber died instantly after he was hit by a bullet during a fierce gun fight between the police and a group of dangerous hoodlums on Thursday.

The robbers had attacked some miners at Oseikrom in the Ashanti Region with the intention of stealing their gold and money at gun point, but luck eluded them when police stepped in.

Before the police could get close to the suspects, the robbers, who were heavily armed, quickly opened fire on the law enforcement officers.

The security agents, who were equally armed, were then compelled to fire back in self-defence, and in the process one of the robbers was killed.

Two of the hoodlums were later on arrested following a police intelligence operation, and they also led the security agents to apprehend a third suspect.

According to a police report, the gun battle happened around 7:30am on Thursday, December 2, 2021 at Oseikrom.

The report signed ACP Kwesi Ofori, Director General, Public Affairs of the Ghana Police Service, said a police patrol team were called when the robbers attacked the miners at Oseikrom.

“While the police were approaching, the gang opened fire on them. The police also returned fire, leading to the death of one, while the rest fled the scene,” he said.

At noon same day, he said two persons, Richard Nkrumah alias ‘Paa Yaw’ and Alex Appiah alias ‘Ameley’, who were part of the robbery gang, were arrested through an intelligence-led operation.

ACP Ofori said during interrogation, the two suspects mentioned one Emmanuel alias ‘Awoloh’, a driver of the miners, as masterminding the robbery operation.

According to him, suspects Paa Yaw and Ameley, earlier on, led the police to retrieve a pump action gun, loaded with five live cartridges at the crime scene.

He said the body of the dead robber has been deposited in a morgue, awaiting identification and autopsy, adding that the Ashanti Regional Police deserve praise for foiling the robbery at Oseikrom.

ACP Ofori also assured that the police are determined to work hard and weed out armed gangs in the various communities, calling for public support for the police.