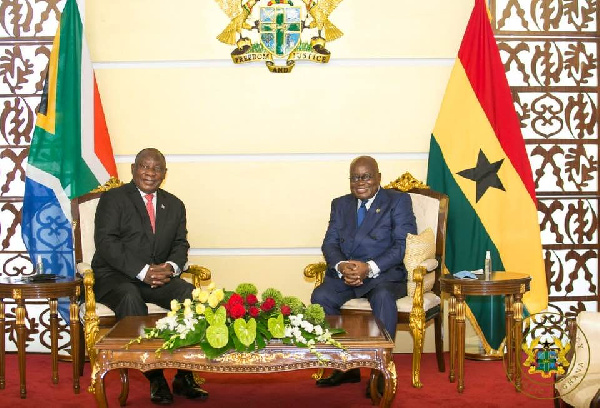 President of South Africa, Cyril Ramaphosa has congratulated President Nana Addo Dankwa Akufo-Addo being recognized as the African of the Year by Forbes Magazine.

At a meeting with Mr Akufo-Addo at the Jubilee House in Accra on Saturday, December 4, he said “Allow me to be personal and congratulate you for being chosen as ‘African of the Year’ by Forbes Magazine. The recognition by this magazine is about your vision not only for Ghana, but also for the people of our continent as well.

He is not the only high profile person to have congratulated Mr Akufo-Addo.

President of the African Development Bank Group, Akinwumi A. Adesina, also did same.

Forbes Africa magazine in its latest issue unveiled on Friday 3 December 2021 named Mr Akufo-Addo as the African of the Year.

“@NAkufoAddo, Ghana’s President, has repositioned the country in the global marketplace as one reliant on its own resources and strengths. Get your copy of FORBES AFRICA and read an exclusive interview with #NanaAkufoAddo,” Forbes Africa tweeted.

Reacting to this announcement, President Akufo-Addo told CNBC Africa, he was grateful for the recognition.

He said. “Thanks very much for recognizing the work that we are doing here in Ghana. For the African version of the magazine to pick me, I’m very grateful for me.”

The AfDB boss in a message sent to Director of Communications at the Presidency, Mr Eugene Arhin said “I would like to warmly congratulate HE Nana Addo Dankwa Akufo-Addo, President of the Republic of Ghana, on being named Forbes Africa’s ‘African of the Year.’

“This is an excellent and very well-deserved honour and recognition.

“As a leader, you continue to push the boundaries of what is possible for Ghana and the people of Africa. You are an embodiment of a remarkable ‘can-do’ African spirit … a spirit of focused determination that seeks to make a difference in the lives of your people and unleash Africa’s true potential.”