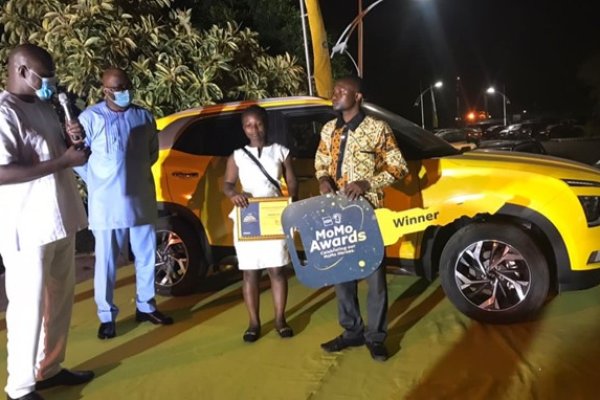 Kumasi, Dec. 05, GNA – MTN Ghana has held its annual awards ceremony for mobile money (MoMo) merchants and agents in the northern sector of the country.
Winners from nine regions including Ashanti, Western North, Bono, Ahafo, Bono East, Northern, North East, Upper East, and Upper West converged in Kumasi to receive their prizes at a colourful ceremony.
They took home prizes ranging from television sets, fridges, laptops, security cameras, generators, and motorbikes.
Mr Francis Wiredu of Fransco Limited, won the ultimate prize which was a brand-new Hyundai SUV in recognition of his hard work and commitment to the MoMo business.
Mr Eli Hini, Chief Executive Officer (CEO) of Mobile Money Limited applauded the merchants and agents for their role in deepening financial inclusion in Ghana.
He said they had been worthy partners of MTN over the years and deserved to be recognised for being the link between the company and the millions of Ghanaians using MoMo for financial transactions.
He said because the agents were scattered in every corner of the country, people no longer carry huge sums on them, thereby, reducing the risk of being robbed of their monies.
The company currently has over 183,000 merchants and agents providing essential financial services to the general public across the country, he disclosed.
Mr Hini announced that MTN was taking concrete steps to mitigate the activities of fraudsters, adding that, it was in the process of reviewing the use of identity cards for cash out as a measure to counter fraudsters.
“We are also working as an industry to block the phones of fraudsters and for that matter making their fraudulent activities too expensive,” he noted.
The CEO also cautioned MoMo agents involved in creating false transactions with the aim of claiming commission that they had not worked for.
He entreated them to work with honesty, saying that MTN was committed to paying all commission due them.
He said the company had already blacklisted over 20,000 MoMo agents for their fraudulent activities and warned existing agents that they may suffer a similar fate if they engaged in such activities.