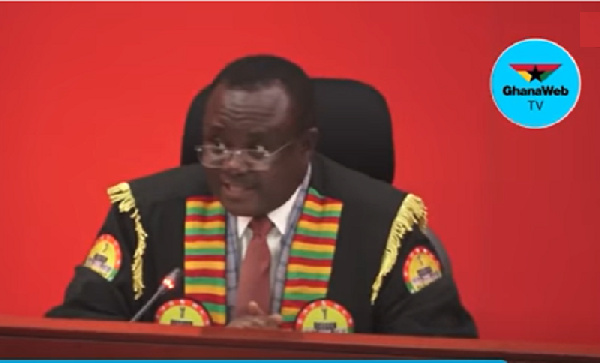 Member of Parliament for Bekwai and First Deputy Speaker of the House has spoken about the chaotic events that marred the December 1, 2021, sitting he partly presided over.

According to Joseph Osei-Owusu, popularly referred to as Joe Wise, whereas the events of the day were regrettable, it was imperative to point out recalcitrant MPs and not paint all of them with the same brush.

He adds that he associates with the apology issued by the Public Affairs Directorate on behalf of Parliament as an institution.

It was Joe Wise’s pronouncement that he was not the Speaker, in justifying his decision to count himself in determining the quorum for decision making that triggered protests from the Minority side of the House. He subsequently suspended sitting and left the Chamber.

After he left, there were near scuffles on the floor as a group of MPs attempted to snatch the mace and the chair of the Speaker but Joe Wise told Emefa Appau on Joy News’ ‘The Probe’ programme that all of the chaotic scenes happened behind him.

“On Thursday (December 2, 2021) I called a meeting to the leaders to discuss what I’d seen on videos after I left the chamber. So when the leadership came … they informed me that indeed a committee had been set up by the two sides.

“It is because I wanted to understand what happened after I left the Chamber. And after we had the discussion we agreed that we will not do any serious business for that morning,” he added.

He said it was because of that agreement that it will be a low workday that he did not preside over the house on Thursday.

On Wednesday, the Bekwai MP in dismissing the motion and arguments of the minority caucus seeking a reversal of the approval of the 2022 budget stated that there was a distinction between who a deputy speaker was and who a Speaker is.

His ruling led to loud protests on the part of the Minority forcing him to suspend sitting. Joe Wise did not return to the seat and the house was adjourned by Second Deputy Speaker who also presided over the house the following day.

The sitting of December 2 was brief, lasting some four minutes after the leadership of both Caucuses agreed to set up a committee to deescalate tensions before the House reconvenes next Tuesday.