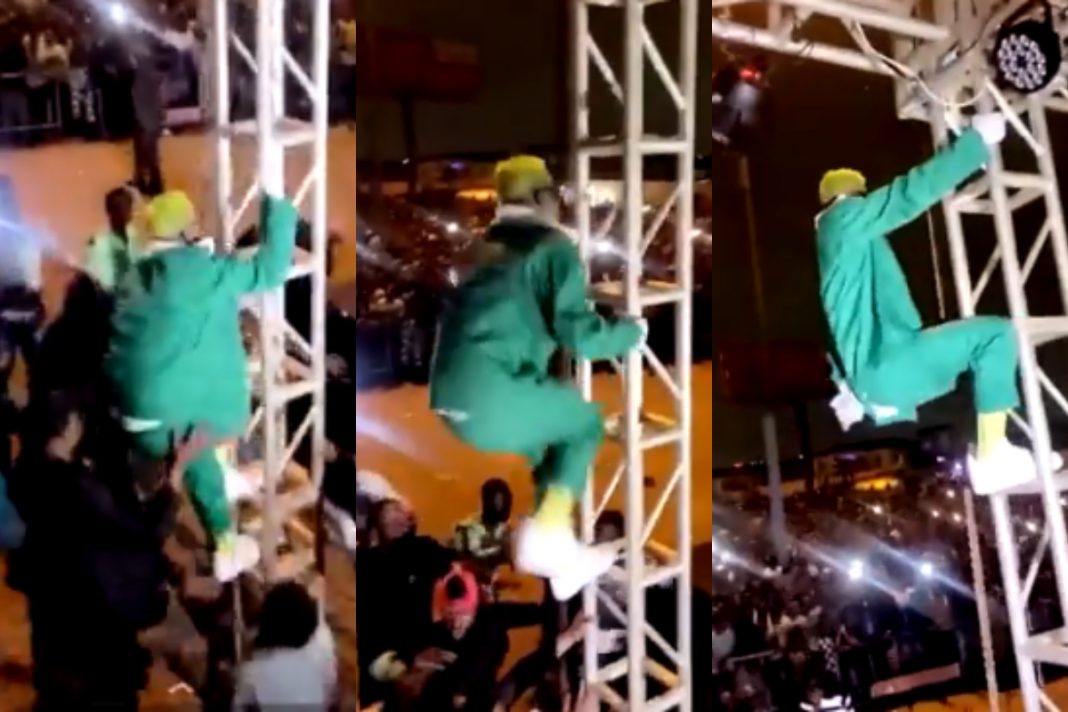 A video is currently making rounds on social media that captured the moments Shatta Wale turned his stage performance into a stunt as he tried climbing one of the pillars holding the stage.

Shatta Wale earlier made a spectacular appearance in Kumasi with his buddy, Medikal for a concert. Videos circulated on social media captured the moments the superstars were being hailed by the fans on the street of Kumasi.

Shatta Wale who recently debuted his newest hairstyle was also spotted in a viral video spraying hundreds of cedis on his fans on the street just to reciprocate the love and support they’ve shown him.

In a viral video sighted on Twitter, the dancehall musician decided to twist his stage performance by adding a little bit of drama as he was captured trying to climb a pillar while performing on the stage.

In other news, Ghanaian artist manager and entertainment pundit, Mr. Logic has gone after the ace music producer, Jay Q for rubbishing the works of the CEO of Legacy Life Entertainment, Killbeatz.

This comes after Legacy Life Entertainment signee, King Promise took to social media to eulogize his boss for his enormous contribution to the music industry. He tagged Killbeatz as the Greatest of all time while referring to any other music producer as disciples of his boss.

He wrote; Put some respect on the name KILLBEATZ ! Greatest of all time. Agyinkwa… the rest be disciples #Respectfully.

Jay Q and King Promise were on a collision course after the latter tagged all music producers as disciples of his boss, Killbeatz. Jay Q obviously disagreed with King Promise’s remarks of crowning Killbeatz as the Greatest of all time, asking him to accord every music producer in Ghana with respect.