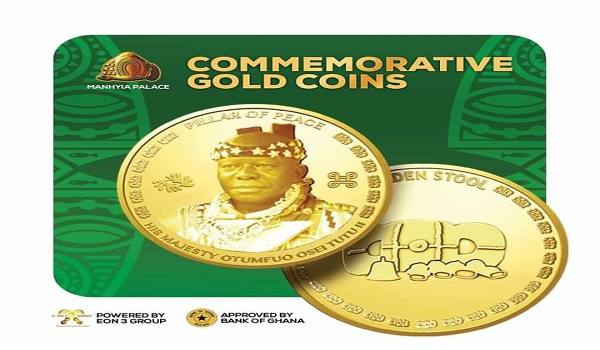 Gold Coins not for legal transactions

According to reports, the Commemorative Gold Coins is a fitting memorial in honour of His Majesty Otumfuo Osei Tutu II for the significant role he played in restoring peace to the Dagbon kingdom in the Northern Region of Ghana after decades of protracted Chieftaincy crisis between members of the royal gates.

Otumfuo was also acknowledged for his role as a restraining influence during almost every election cycle in Ghana.

That influence, additionally, has ensured peaceful elections, culminating in seamless transitions in governments, especially when power changed hands between the two dominant political parties in Ghana.

The face of the Gold Coin bears the image of Otumfuo, with the Adinkra symbols “Bi Nka Bi” on the left side and “Mpatapo,” on the right which symbolizes peace, harmony, and reconciliation.

The reverse of the Gold Coin bears the image of the Golden Stool of Asanteman also known as “Sikadwa Kofi.” Legend has it that, the Sikadwa Kofi, which is the most prized possession of the Asante Kingdom and symbolizes the soul of the Asante people was commandeered from the Heavens by the High Priest, Okomfo Anokye and landed on the lap of the first Asante King, Otumfuo Osei Tutu I.