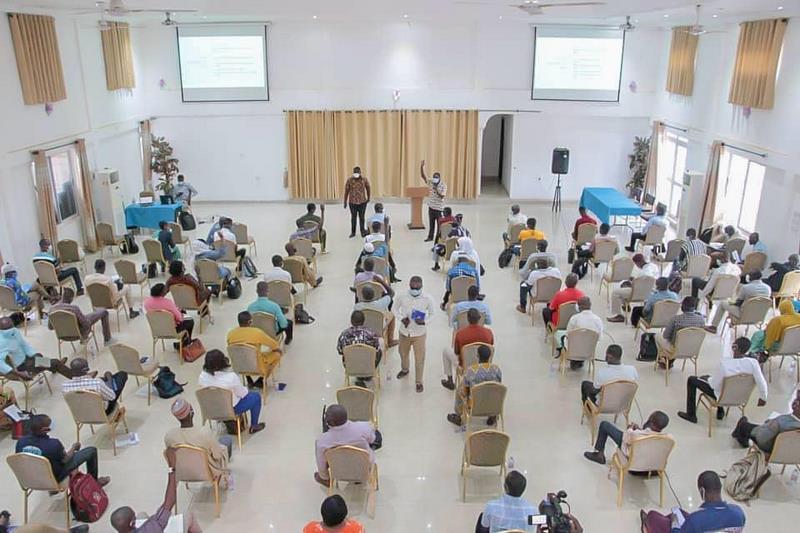 The Regional Director of Ghana Health Service (GHS), Savannah Region, Dr Chrysantus Kubio, has underscored that Larval Source Management (LSM) will help address gaps inherent in some of the malaria control interventions in the region.

According to him, LSM as a malaria control measure does not target just the mosquito but also clears breeding grounds of mosquito larvae.

“I think it [LSM] is a useful intervention and will help address the gaps in the other malaria control interventions,” he said.

Dr Kubio was speaking to journalists on the sidelines of a one-day joint LSM training workshop in Tamale, Northern Region, on Wednesday, May 12, 2021, organised for key stakeholders in the health sector.

The training was organised by the GHS under its National Malaria Control Programme (NAMCOP) in collaboration with Noguchi Memorial Institute of Medical Research (NMIMR) and waste management company, Zoomlion Ghana Limited (ZGL).

It brought together about 140 health workers from 10 and four districts in the Northern and Savannah Regions respectively.

Dr Kubio explained that the LSM as a malaria control measure aims at eliminating mosquito larvae, hence its implementation reduces malaria cases in the two regions.

“And that is why we think that it is important we are having this training which will support us as far as malaria elimination is concerned in our regions,” he maintained.

According to the Savannah regional health director, even though there were a number of malaria control interventions, his region was currently doing the point mass distribution.

“I know in other regions and for some districts too they are doing indoor residual spraying (IRS). Also most people after receiving the nets do not use them appropriately, and when it comes to the indoor residual spraying, I know there are instances whereby people find it difficult because they will have to rearrange their rooms and carry out things, so they resist in accepting these interventions,” he said.

He said though malaria cases were being managed, he emphasised that there were still areas that “we think that we should be able to prevent mosquito bites, and that is where we are coming in with the nets and also coming in to see how we can address the issue of breeding grounds for the mosquitoes.”

“So the LSM is beneficial in the sense that we are going to reduce the number of mosquitoes in the region and for that matter reduce the disease burden in the communities that we serve,” he added.

The Regional Director of Environmental Health and Sanitation Department, Savannah Region, Adam Wahab, commended the organisers for what he described as a “laudable programme.”

“This programme called Larvaciding in the form of a workshop for participants from the environmental health, health and other departments is so laudable because it has a direct link with the burden of malaria in this country.

The LSM training, he recommended, should be done twice every year, explaining that such a move will enable them have basic skills needed as fundamentals to identify especially the different types of larvae.

For his part, a Vector Control Technical Officer, of  NMCP, Mr Christian Atta-Obeng, indicated that the training was being organised to control the larvae of mosquitoes and ensue they do not grow into adults.

“We have carefully selected officers to be trained; and we take them through routine training to make sure that the objectives of the programme are met,” he added.

To this end, he stressed the need for the citizenry to contribute towards the successful implementation of the LSM  intervention.

LSM, a vector control tool, for managing mosquito breeding sites is only recommended as a supplementary malaria vector control measure which adds on to other core vector control interventions such as long-lasting insecticidal treated nets (LLINs) and indoor residual spraying (IRS).

There are four main types of LSM including: habitat modification, which means a permanent alteration to the environment, e.g., land reclamation or surface water drainage; habitat manipulation, which refers to a recurrent activity e.g. water-level manipulation, flushing of streams, the shading or exposure of habitats; larviciding, which involves regular application of a biological or chemical insecticide to water bodies; and biological control, which involves the introduction of natural predators into water bodies, for example, predatory fish or invertebrates to feed on mosquito larvae or pupae (WHO LSM  Operational Manual, 2013).

When appropriately implemented, LSM can contribute to reducing the numbers of both indoor and out-door biting mosquitoes, and in malaria control, it can be a useful addition to programme tools to reduce the mosquito population in remaining malaria ‘hotspots’. Where appropriate, it can also help programmes to reduce their overall dependence on insecticides, thereby making a contribution to preventing the emergence of insecticide resistance. LSM can also be useful to help control other vector borne diseases, especially dengue as well solve socio-cultural issues in indoor residual spraying programmes as well as LLIN.

WHO recommends larviciding in areas where mosquito breeding sites are few, fixed and findable, and where the sites are easy to identify, map and treat.