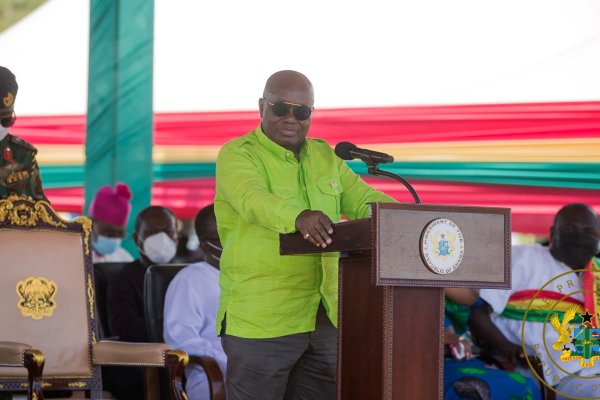 Cape Coast (C/R), Dec. 3, GNA- President Nana Addo Dankwa Akufo-Addo says he is optimistic that Ghana can leverage her food systems to achieve the vision of a Ghana beyond Aid.

He said the central pillar of his government’s agricultural transformative policy, the Programme for Planting for Food and Jobs, launched in April 2017, as well as other flagship agricultural initiatives, had posted impressive growth records that is improving the country’s food self-reliance.

The President who was speaking at the 37th edition of the national farmers’ day celebration at the Adisadel College Park in Cape Coast in the Central Region on Friday, said his government’s structured initiatives and policies, as well as the sustained investments in resources and expertise, was spurring the country’s economic growth.

He said that complementary programmes, such as the revitalisation of the National Food Buffer Stock Company to improve market access, investment in warehouses to store grain surpluses anticipated from increased productivity and production, the” One-Village-One-Dam” policy to increase water availability for all year production, and the” One-District-One-Factory ” initiative to promote rural industrialisation, had all contributed to the successes chalked in the agriculture sector.
“The record is impressive,” he stressed.

President Akufo-Addo said the government would continue to create the enabling environment and strengthen the linkages between the Programme for Planting for Food and Jobs and the rural industrialisation agenda, the One District, One Factory.

He noted however that consolidating and strengthening Ghana’s food systems have become even more critical in the light of the COVID-19 pandemic that continues to disrupt global supply chains, and expose the vulnerability of the food system worldwide.

The President stressed that it was of great necessity, that Ghana built a sustainable, resilient and equitable food system that can withstand such shocks, emphatic that his administration would push the needed action to improve the contribution of agriculture to Ghana’s economy because, “There is wealth in Agriculture.

He called for the support of all stakeholders, including farmers and fisherfolk, value chain actors, entrepreneurs, financial institutions, policymakers, researchers and friends of Ghana towards the realization of the government’s agenda of transformation of the agricultural sector and consolidation of the country’s food systems.

This year’s event, jointly hosted by the ministries of Food and Agriculture, Fisheries and Aquaculture Development and the Ghana Cocoa Board, is being held on the theme, “Planting for Food and Jobs; Consolidating Food Systems in Ghana.

The day recognizes the contributions of farmers and fisherfolks to Ghana socio-economic development. A total of 160 farmers and fishermen across the country are to receive awards for their sterling effort at ensuring food security in the nation.

Alhaji Mashud Mohammed from the Meon District of the Northern Region was adjudged the 2021 Overall Best National Farmer.

He received GHS600,000 from the Agricultural Development Bank, 500,000 worth of insurance cover from GLICO insurance and a study trip to Israel sponsored by Broadspectrum Limited.

Mr Kwaku Eshun from the Gomoa West Central of the Central Region was the Overall Best Fisherman and would receive a two-bedroom house.