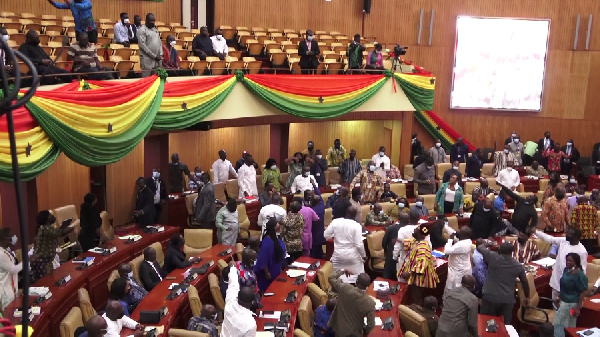 Parliament was erupted into chaos

In the last two weeks, Parliament has been in the news for all the bad reasons, starting from the historic rejection of the 2022 Budget Statement and Economic Policy as presented to Parliament by Minister of Finance, Ken Ofori-Atta.

Thereafter, and under very controversial circumstances, the decision from Friday, November 26, 2021, was overturned by the House on November 30, 2021, with only Majority members present in it, and with one of them, the Member of Parliament for Bekwai, Joseph Osei-Owusu, in the Chair of the Speaker.

When the Minority MPs returned the following day, December 1, they called for that decision to be overturned, citing constitutional arguments that the House of 137 members did not form a quorum.

The NPP MPs had other arguments from the laws: they formed a quorum with the inclusion of their member who played a dual role on the day as the sit-in Speaker of Parliament, and an MP.

Tempers begun to rise as things appeared to get clearer and clearer that the MPs on the Majority side, led by the First Deputy Speaker – who was in the Chair, would not have any of the arguments being put forward by MPs on the Minority.

Soon enough, chaotic scenes started creeping into the Chamber as MPs randomly spoke into the microphones without going through the regular ‘be-caught-by-the-eye-of-the-speaker-before-you-speak’ convention in the House.

“When a member is presiding; either a Deputy Speaker, or a member who by necessity is elected among members to preside, that person does no vote,” sit-in Speaker, Joseph Osei-Owusu said.

But before he could say any more, a male voice spoke through the microphones, stating, “You are deviating; he is deviating.”

Joseph Osei-Owusu, visibly shocked, quizzed: “Who was that?”

“Shut up!” another voice cut through.

“You should shut up rather,” another voice came through.

“Who was that?” the Speaker asked again.

By this time, the sit-in Speaker of Parliament had begun looking down from his sitting area and ordered, “Can a Marshall find that person and walk him out?”

The rest of the House, howbeit in a much more careful manner, was erupted in murmurings, even as one of the MPs, whose microphone was still on, said in Twi but interpreted into English: “Let him finish the ruling.”

But then there was another MP from the Majority side whose momentary command kind of sped up things even more.

The MP for Damongo, who is also the Minister of Lands and Natural Resources, Samuel Abu Jinapor, had these simple words for the Speaker in the heat of the moment: “Speaker rule quickly!”

It would take another few minutes for the sit-in Speaker of Parliament, Joseph Osei-Owusu, to conclude his judgment on proceedings of the day, but those words must have meant something to how timeously the Speaker did all that he did.

“So, the clear distinction has been set out and it is on record in this House. Then, when members argue that otherwise provided in the constitution, it is clear that it is provided for in Article 2912, where it is required that a decision be made two-thirds of members. It doesn’t mean we should go through a quorum for…

“So, Honourable members, let me state on record that I am a Member of Parliament, I was counted to make the quorum and I make the quorum but I did not vote while presiding, therefore the application; the request is refused,” the sit-in Speaker said, followed by a bang of the gavel, marking his last words before everything went up the roof in the House.