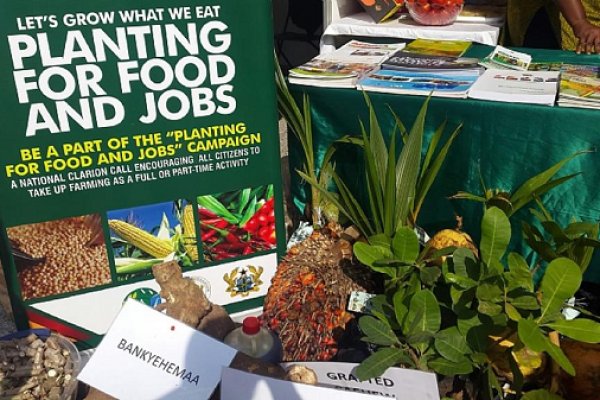 Accra, Dec 3, GNA-The Tema Metropolitan Chief Executive, Yohane Amarh Ashitey, has given the assurance that President Akufo-Addo’s signature agricultural campaign, Planting for Food and Jobs (PFJ) will only get better into the future.
On the sidelines of the celebration of the 2021 Farmers Day at Tema Community 7, Mr Amarh Ashitey told the Ghana News Agency that plans weree far advanced to invest even more into the Programme after it took off to a good start.
“You may have heard of the US$105million facility that the government is sourcing from the International Fund for Agriculture Development (IFAD) for the PFJ. That is just one of a number of investments that are going into the programme,”.
He added, “I can promise you that this masterstroke from President Akufo-Addo will only get better and better.”
Already, he pointed out, “The PFJ has been producing magnificent results, including; leading to Ghana becoming so self-sufficient in plantain production that it stopped importing and begun exporting plantain for the first time in many years.”
He added that the Programme was also providing jobs for the country’s youth and yielding millions in revenue for government.
“In the first year of its implementation, that is 2019, the PFJ raked in Ghc1.2billion for government. This was just the first year,” he said, adding, “it is the reason President Akufo-Addo and his government are encouraged to invest more into the PFJ.”
On food inflation, he said the perceived food inflation was one of the unsolicited side-problems of the COVID-19 pandemic.
“But now that we have a firm hold on COVID-19, we can only look forward to a future where President Akufo-Addo will earn even more praise for this wonderful programme. The PFJ will only get better”.
Mr. Amarh Ashitey also urged the Majority and Minority sides of Parliament to forsake entrenched positions over the 2022 budget and seek compromise for the benefit of the country.
“I think it is praiseworthy that the Majority and Finance Minister have taken the lead to offer the olive branch by agreeing to revise some of the programmes and levies. The compromises on the Agyapa deal, Aker Energy deal and the tentative agreement to revise down the e-levy are painful concessions by the government. I expect the Minority to respond in kind.”
Those in attendance included; the Member of Parliament for Tema East, Mr. Isaac Ashai Odamtten, the acting President of the Tema Traditional Council, Nii Adjetey Agbo, The National Dean of presiding members, Mr. Joseph Korto, Security Chiefs and Assembly members of Tema.