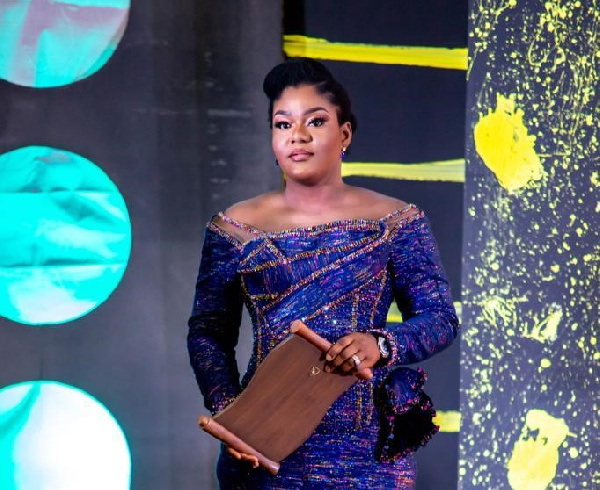 The President of the Young Democrat Union of Africa, H.E Louisa Atta-Agyemang on Saturday, 27th November 2021 received the prestigious YAA ASANTEWAA AWARD from the APEC ASHANTI EXCELLENCE AWARDS which took place in Kumasi.

She received recognition for her role in female leadership both in Ghana and internationally. The awards were instituted by the Association of Past Executives and Coordinators – Ashanti ( APEC-ASHANTI ) to recognize individuals and groups who are connected to the region and impacting various aspects of the nation.

Amongst the honoured for the night was the Minister of Energy and MP for Manhyia South, Hon Matthew Opoku Prempeh, the deputy Finance Minister and MP for Ejisu, Hon. John Kumah, the Paramount Chief of Tepa, Hon Samuel Okudzeto Ablakwa, Director General of National Lottery Authority, Mr Samuel Awuku, ZionFelix and many others.

In her remarks, she indicated her strong appreciation and pledged her commitment towards the cause of women and empowerment. She added that, though she believes that the limitations are enormous, young people especially women have everything it takes to provide the necessary leadership our continent needs, “I am convinced beyond reasonable doubt when I see young women making an amazing impact and winning, I am truly convinced that we can create a society that gives us all the chance to be the best we can ever be …” she went on to state.

Madam Louisa Atta-Agyemang has in recent times been praised for her glass-ceiling breaking steps, which sets the path for many female leaders in Ghana and on the continent.

Including serving as the first and only female President of the Ghana Union of Professional Students and subsequently the General Secretary and Acting President of NUGS.