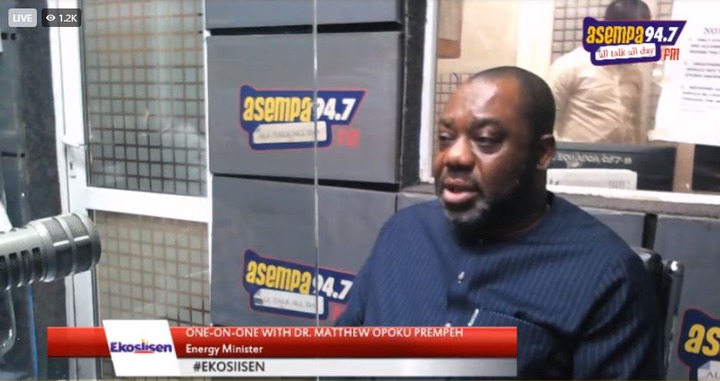 The Minister for Energy and Member of Parliament for Manhyia South Constituency, Hon. Dr. Matthew Opoku Prempeh has hinted that he would lead the people of Kumasi on a demonstration if the Finance Minister , Hon. Ken Ofori-Atta allocates funds for the Keta Sea Defense Project. He made this statement on Thursday, December 2, 2021 in a interview with Asempa FM’s Osei Bonsu (OB) on the Ekosii Sen Programme. Hon. Dr. Matthew Opoku Prempeh added that the NDC during its tenure in office did not undertake the Keta Sea Defense Project even though they had funds which were allocated for the said project.

He explained that the budget is national business document that cannot solve all the issues in just a day. He further explained that addressing only the needs of the people of Keta would not be fair as there are other Ghanaians who equally need assistance – citing the people in the Ashanti Region who were displaced by numerous floods in recent times as an example. He reiterated that these incidents [floodings] occurred at the time of the budget preparation but the flood victims were not catered for in the budget. He added that the people of Kumasi have been experiencing power outages for the past few months but all these were not catered for in the budget.

Hon. Dr. Matthew Opoku Prempeh added that even though he supports the Keta Sea Defense Project, it should not be held around the neck of the Finance Minister to compulsorily include the project in the 2022 Budget before the budget is approved. The Manhyia South MP further stated that the Finance Minister should be allowed to look into the national coffers to see if there are funds available for the Sea Defense Project.

What do you make of the Honorable Minister’s statements concerning the Keta Sea Defense Project? Let us know your views in the Comments section.

Removal Of Soldiers From The Speaker’s Office: Manasseh Azure has these to ask