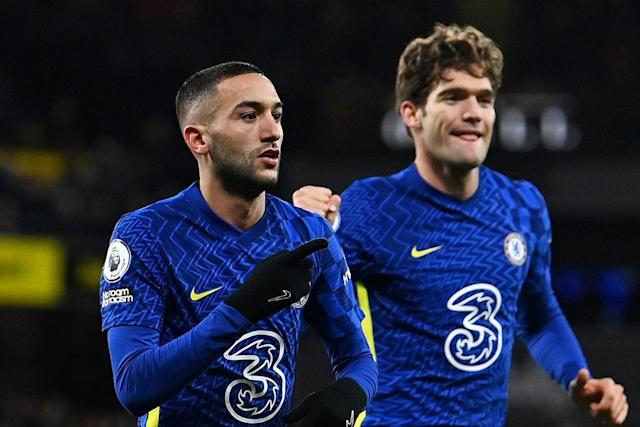 Hakim Ziyech’s goal 18 minutes from time secured a victory for Chelsea at Watford which keeps them top of the Premier League.

This was far from a routine night for the Blues who went in front through Mason Mount’s cool finish after Alonso pulled the ball back for Havertz, who squared the ball for the England international to slot home.

Two minutes before halftime the game was level though when Moussa Sissoko played Emmanuel Dennis through on goal and he coolly waited for Antonio Rudiger to challenge him before playing the ball through his legs and into the net.

After some nervous moments at both ends, second-half substitute Ziyech sealed the game with a rocket into the roof of the net after a fine pull back from Mount.

Watford were intent on not letting Chelsea relax in possession from the first whistle and Mendy had to produce a fantastic save from Azpilicueta’s inadvertent shot from Kiko’s cross.

The game was delayed for almost half an hour while waiting for a fan treated for a cardiac arrest to be stabilised.

Watford kept up the pressure after the game restarted though Mount could have opened the scoring earlier than he did as the width of the post denied his half-volley latching onto Ruben Loftus-Cheek’s header over the defence.

The Hornets pressed for an equaliser in the closing stages with Mendy being required to tip over a late rocket free kick from Juraj Kucka and last-ditch challenges required to stop further efforts on goal.