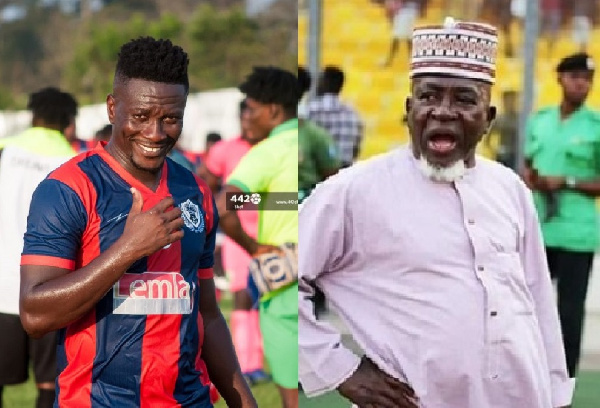 Veteran Ghana football administrator, Alhaji Karim Grusah has apologized to Black Stars captain, Asamoah Gyan for making some comments which are deemed to be body shaming.

Alhaji Grusah descended heavily on Asamoah Gyan for describing the Black Stars’ penalty against the Bafana Bafana of South Africa as a soft one.

Gyan noted in an Asempa FM interview that the soft contact between Amartey and his South African marker should not have resulted in a penalty.

“From where I sit and how I saw it, I think Daniel Amartey went down too easily but the referee was closer to the spot and probably had a better view of the situation,” he told Asempa FM.

The King Faisal owner insulted the Black Stars all-time top scorer as he stated that Gyan’s comments seemed to suggest that he supports South Africa in the petition against FIFA.

“The penalty was a penalty. Because he wanted to control Ghanaian football and he didn’t have the chance. Look at how his buttocks have become bloated. Why should he be brought back to the Black Stars? For him to do what? FIFA is more sensible than Asamoah Gyan. If not for the Black Stars, who is Asamoah Gyan? Even ball boy doesn’t qualify to be in this current Black Stars,” he said in audio aired by Kumasi-based Pure FM.

But in a separate interview with Accra-based Angel FM, Alhaji Grusah has apologized to Asamoah Gyan for body shamming him.

“I am apologizing to Asamoah Gyan for describing his buttocks that way even though I disagree with his comments on the penalty,” he said.