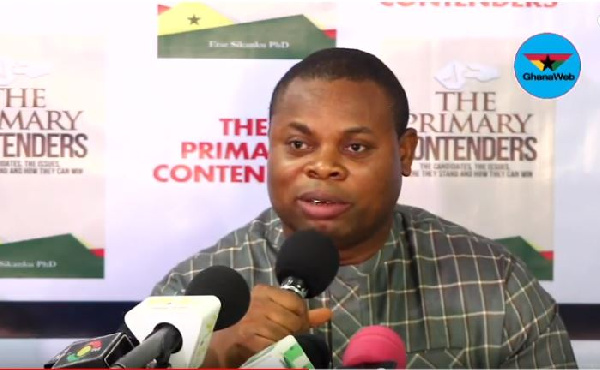 Government to generate revenue from e-levy

President of Imani Africa, Franklin Cudjoe, has asserted that the 2022 budget labelled ‘agyenkwa’ by government, to wit saviour is struggling to survive.

His comment comes after several agitations made by some sections of the public and the minority in parliament over the newly introduced taxes in the 2022 budget.

While adding his voice to the growing development, he suggested that the most talked-about e-levy be reduced from 1.75% to 0.75%.

Franklin Cudjoe continued that government needs to review its price value for 49% of the royalties in the controversial Agyapa deal from $1 billion to $3 billion.

In a Facebook post sighted by GhanaWeb, the CEO of Imani Africa said, “The 2022 budget christened “Agyenkwa”( “Saviour” in English) is itself struggling to survive. How about 0.75% E-levy instead of 1.75%, and a $3bn value for 49% royalties in Agyapa instead of govt’s projected $1bn (based on present value calculation of gold prices)?”

On November 17, 2021, Finance Minister, Ken Ofori-Atta, during the 2022 budget reading in parliament, announced the introduction of 1.75% tax on all electronic transactions.

According to him, this new directive forms part of strategies to widen the country’s tax net.

He added that the 1.75% tax is also to enhance financial inclusion and protect the vulnerable in the country.

Meanwhile, Ken Ofori-Atta has said the government has reduced the e-levy tax from 1.75% to 1.5%.

This, he said, is to help lessen the burden of Ghanaians.