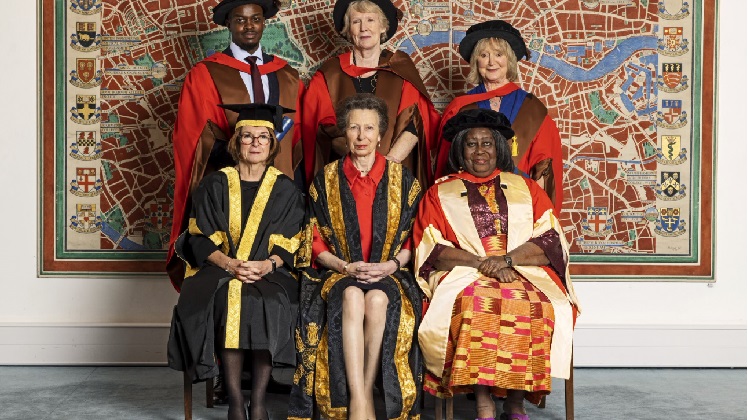 The University of London has awarded an honorary degree to the Chancellor of the University of Ghana, Mary Chinery-Hesse, for her substantial contributions to public life and the university.

The award was presented by the university’s Chancellor, Her Royal Highness, The Princess Royal, at the University of London’s Foundation Day.

Three other individuals George Mpanga (George the Poet), Margaret MacMillan, and Joanna David were also awarded at the ceremony.

This year’s event took place in Bloomsbury’s Senate House and marked the 185th anniversary of the creation of the University of London by the Royal Charter on 28 November 1836.

The four remarkable individuals, who received honours, have all made substantial contributions to public life and the University in very different ways, the University of London said.

Mary Chinery-Hesse has had distinguished careers in Ghana’s Civil Service and at the United Nations.

She is an important voice on economic development issues, a defender of human and women’s rights, and an advocate for African imperatives.

She served as a Chief Advisor to President J.A. Kufuor and is a proud recipient of the Order of the Star of Ghana.