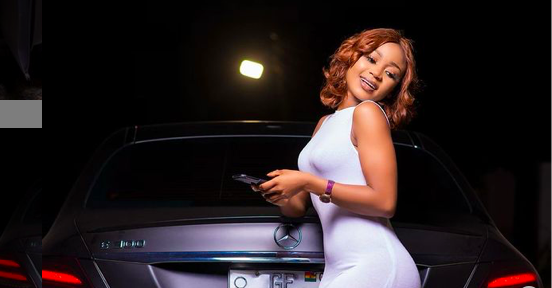 Social media has erupted after actress, influencer, and Instagram celeb Akuapem Poloo was slapped with a 90-days jail term a shirt a while ago.

Recall that in April this year, Akuapem Poloo was to spend 90 days in jail on her own plea as she pleaded guilty to charge of the publication of n*de photos involving her son.

According to a report on GraphicOnline.com, the Criminal Division of the court presided over by Justice Ruby Aryeetey upheld the Circuit court decision on grounds that the Circuit court’s decision was not manifestly excessive.

“This court will not interfere and the appeal is therefore dismissed,” Justice Aryee said.

The court ordered that in the absence of the convict, Akuapem Poloo’s child should be given to any competent person in the family to take care of.

After the news of her incarceration went viral, netizens popped up with varied responses to the foregoing.

See some of the samples we have gathered for you;

@Yesu: I just heard Akuapem Poloo will be spending the Xmas in Nsawam ebi true?

@Akosua Tumtun: I thought Akuapem Poloo‘s case was over, so why is she suddenly going to continue her jail term this December?

@Mr president: So they waited till it’s Christmas to arrest Akuapem Poloo. This country deɛ

@Akrobeta: Ow Akuapem poloo Is it a good lawyer or money that will help her out of this ? How did Medikal and Shatta wale survive this

@Kobbyfounder: Akuapem Poloo is about to spend 90days in prison for posting a nude but Nam 1, Woyome and Nyantakyi are walking around freely. Wey country koraa this?

@Pi Coin expert: Akuapem Poloo back to serve 90 days in jail. Her appeal has backfired. Shatta and Medikal searching for their bail documents.