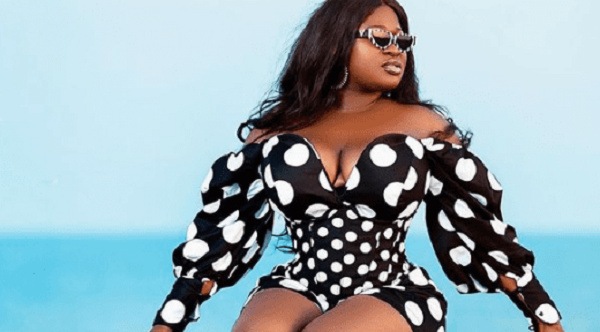 Ghanaian songstress Sista Afia fueled plastic surgery rumors after her debut appearance featuring a tiny waist. According to the buxom singer, her new looks are a result of a dedicated weight loss regime.

Sista Afia addressed the hush-hush which had flooded the streets since the change in her physical appearance. Once upon a time, a slight bulge would be spotted around her stomach area. Now she sports a flat and niched waist to the envy of all.

In an interview on United , she revealed her secret to achieving such an enviable feat in such a short time.

“Well, I have changed. I have lost a lot of weight, and I have been doing so many crazy workouts.

“I don’t know where they heard that from. Because when I was going to fix my body, who was there with me? Nobody was there. I am just minding my business, drinking a lot of water, and just looking good. What is the big deal?”

She also likened liposuction to life-threatening surgeries to remove tumors like fibroids. Sista Afia opined that once you are not comfortable with it, feel free to do something about it.

“Why does every time a girl looks good, then there’s an uproar about fixing their bodies? It doesn’t make sense. At the end of the day, even those with fibroids go to the hospitals to have it removed. So how much more as a woman, if you don’t feel comfortable with your fat, why can’t you go and remove your fat? It just means the same thing.”

According to Sista Afia, her new body from the gym is the gospel, and she is smitten over it. Plus, she has no qualms with people who choose to go under the knife.

“ I am looking good. I am liking my new body. I don’t have a problem with anybody that has done their body. I am in support. It’s your body. Whatever you want to do.”