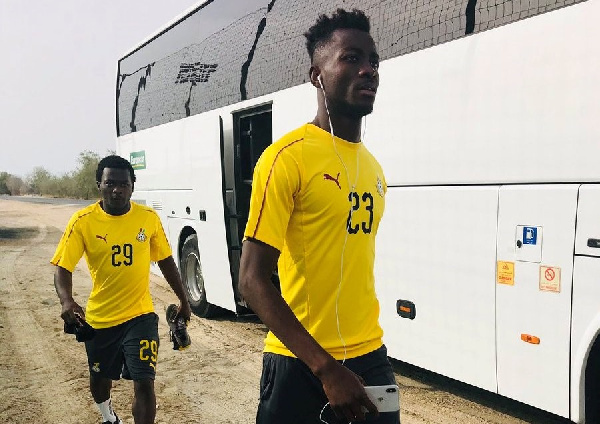 FC St. Gallen defender Musah Nuhu is hoping to force his way into the Black Stars squad ahead of the 2021 Africa Cup of Nations early next year.

Nuhu was invited to the Ghana national team ahead of the 2019 African Cup of Nations, but picked up knock during the training camp in Dubai which ruled him out of the tournament.

The 24-year-old subsequently lost his place in the national team and at St. Gallen due to the injury.

Musa underwent a successful surgery on his knee at the Berit Clinic in Switzerland and was out of action for several months.

“It was difficult because it took longer than we expected it to, the doctors told me it was going to take eight months or something but it took about one and a half years before I was able to start playing again. It was a lot for me.” Nuhu explained to Joy Sports.

The towering centre-back has been in devastating form this season for St. Gallen since his full recovery from the lengthy layoff.

Nuhu has started 7 of the 15 games played so far in the Swiss Super League this season where he has been named in the Team of the Week on two occasions.

The former WAFA SC player who plays alongside Black Stars goalkeeper Lawrence Ati-Zigi is eyeing a call up to the national team soon.

“Yes sure, because I feel like I’m over my injury now and I have started playing games. So if I get the call up to play in the African Cup, it’ll be a great feeling,” the defender said.

“We talk a lot about it. We talk about the way forward and everything. We most times discuss you know – it’s something internal that we feel like ‘what do you think we can do to go forward?’ So we have a lot of conversations when he comes back [from national team assignments].”

The former Ghana U23 is confident of catching the eye new Ghana head coach Milovan Rajevac with his consistent performances.

The Black Stars will battle Morroco, Gabon and Comoros in Group C at the 2021 Africa Cup of Nations in Cameroon.

Rajevac and his technical team are currently a deep search for talents that can make Ghana competitive at Africa’s flagship football tournament next January.