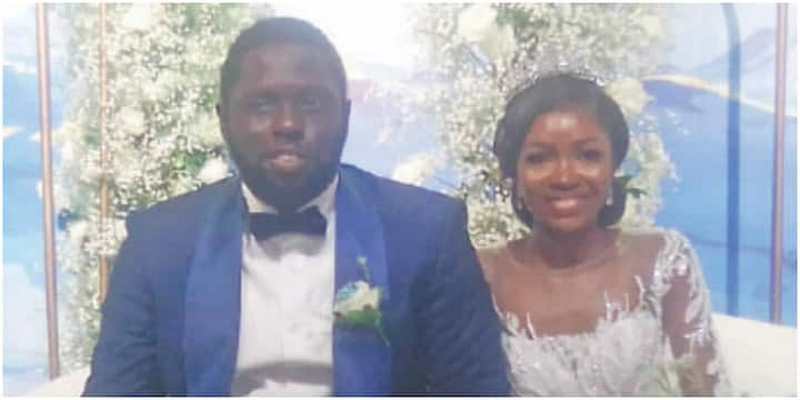 A newly wedded couple in their late twenties left many stunned after it was stated that they tied the knot as virgins.

The chastity of the 29-year-old groom and his 28-year-old bride was made public by the Officiating Minister and Presiding Bishop of Holy Spirit Mission, Charles Ighele during their wedding ceremony which was held in Marcillina’s Place, GRA Ikeja, Lagos.

Oghale added that there were temptations from all angles but they were able to withstand them thanks to the counselling they received.

The bride said she took the decision to be chaste as a teen.

Speaking on the ‘feat,’ the bride stated that she had vowed to keep herself until her wedding night right from her teenage years.

She said fulfilling the vow (to remain chaste) is one of the best things that would happen to her.

“It was not easy for me. I was severally tempted by my lecturers while in the university. Friends also tried to lure me into fornication and men asked me out. In fact, I went through so many challenges. But what guided me was God and my principle,” she said.

@iyke_bennie stated: “That does not guarantee a successful marriage, we don’t even need to know about this.”

@ceoangelworks wrote: “Some things should be left private. This is one of them.”

@ojulewastudio opined: “Awesome testimony.. More of God’s Grace to everyone honouring God with their bodies by Waiting still marriage…in a world that fornication has been a norm.”

“We need more of this so men and ladies see that it’s possible.. Yes by His Grace I married as a virg*in and my 5 sisters as well…I gave my life to Jesus at age 14 in 1988, and I kept myself till my wedding night.”

@ada_inno said: “A lot of children are practicing abstinence. It is just NOT popular which baffles me because it is NOT an easy decision.. I wasn’t but I am raising mine to be.”