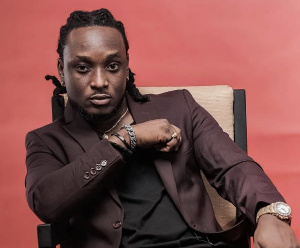 Ghanaian Reggae Dancehall artiste, Epixode, has disclosed that he is now more focused on helping upcoming artistes develop their craft.

He said this in relation to some projects he has been working on after emerging Reggae Dancehall artiste of the year of the 2021 Vodafone Ghana Awards (VGMAs).

Sharing why he has decided to embark on this project, he told Foster Romanus on e.TV Ghana’s Late Nite Celebrity Show, “I feel like they need this space and they need all the support and push they can get. So after the VGMA’s what I did was to release a minute version of the ‘Odeshi’ instrumental just for them to voice and the entries we got were crazy.”

He stated the reception was more than he expected and was amazed at the number of amazing young talents the country has. “I could hear an artiste and go like wow. I was not expecting that and I did not even know young artistes in the country could vibe like that,” he said.

Epixode emphasized that the plan was to get two or three artistes out of the total number and help them but, due to the high number of the artistes, “We ended up choosing 50 instead.”

He noted that with the help of some board members of the VGMA, and some friends, his team aimed to give them some education about the music industry because they lacked knowledge in that field.

“We sent a proposal that this was what we wanted to do to help them. The VGMA sent someone from the board to come and educate them on how selections are made and how they can get good records to be recognized,” he said.

He went on to say that the media also helped him with his publicity as well.

The musician shared that he wanted to climax this initiative with a project which would feature finalists of his contest.

“But it is rather unfortunate that my timing for this year made it impossible because I also had to push other projects out. We will do this early next year where I’m going to bring out an album and feature all these 50 people on there and for me doing this is a win,” he emphasized.

The reigning Reggae Dancehall artiste of the year believes in making kings rather than being a lone king. “To have these guys know that there is one person who has not even got to the Grammys yet but wants to support I think is everything.”