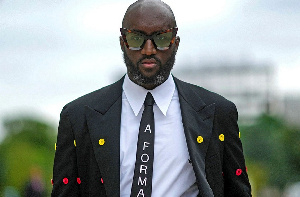 Ghanaian-American entrepreneur Virgil Abloh made a name for himself in the fashion industry before he died after a battle with cancer. The 41-year-old was Louis Vuitton’s first Black artistic director.

He gave big fashion labels a run for their money with the release of Off-White, the streetwear and luxury fashion label that brought an edgy twist into the fashion game.

He founded the Milan-based fashion label Off-White in 2013. Worn by celebrities including Beyonce, Rihanna, Travis Scott, and Kylie Jenner, it was with Off-White that he became hugely successful.

With 49 stores across the globe, Off-White blends high fashion and streetwear and has been described as one of the most influential contemporary fashion labels in recent years.

The label has worked with prominent brands such as Nike, helping to redesign several of Nike’s most popular sneakers. Abloh would create a unique kit for tennis star Serena Williams and collaborate with Canadian retailer SSENSE to create a high-end collection of training and workout clothes. Abloh has also designed furniture for Ikea and worked on contemporary art with Japanese artist Takashi Murakami.

His endeavor in the fashion world earned him a feature as one of the 100 most influential people in the world by Time magazine in 2018. What’s more, Abloh was appointed to the board of directors of The Council of Fashion Designers of America in 2019, and in 2021, he sold a majority stake in his label Off-White to LVMH, Celebrity Net Worth reports. LVMH acquired a 60% stake in Off-White.

As his influence in the fashion industry grew, so was his net worth. According to Celebrity Net Worth, Abloh’s base salary at LVMH was $10 million per year. The Ghanaian-American designer had a net worth of $100 million at the time of his death in November 2021.

Abloh was born on September 30, 1980, in Rockford, Illinois to Ghanaian immigrant parents Nee and Eunice Abloh. He completed his high school diploma at Boylan Catholic High School and went for his post-secondary studies at the University of Wisconsin–Madison where he earned a Bachelor of Science degree in civil engineering in 2002.

Abloh was studying for a Master of Architecture at the Illinois Institute of Technology when he fell in love with fashion. His mom, who was a seamstress, taught him the basics of clothing design. And thanks to that, alongside the design concepts he studied at school and the street culture of Chicago, Abloh entered the fashion world. He started by first designing t-shirts while being a contributor to a popular streetwear blog known as The Brilliance, where he would sometimes criticize top-notch brands for the poor materials they used.

Before earning acclaim as the founder of Off-White, Abloh launched a company named Pyrex Vision in 2012. Pyrex Vision, which was his first company, took deadstock from high-end designers and transformed them into a new brand. Even though the company did amazingly well and helped establish Abloh’s name in the fashion industry, Abloh shut it down after only one year, saying that it was “a side project and an artistic experiment,” according to reports.

Aside from fashion, Abloh loved music, and while at school and college, he would DJ at house parties. Soon, he started playing internationally and would release his own music. He even became a resident DJ at a Las Vegas nightclub in 2019.

The influential fashion designer leaves behind two children and his wife Shannon Abloh, who he married in 2009 after they first met in high school.