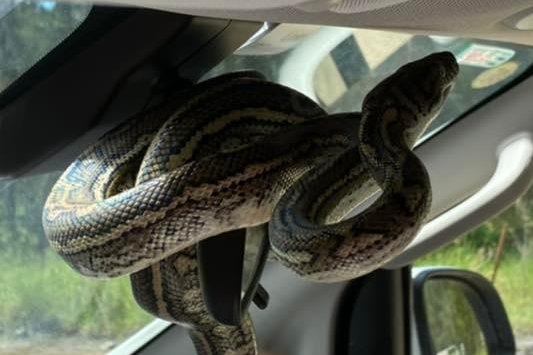 Nov. 30 (UPI) — An Australian family having a picnic in Queensland ended up calling a reptile specialist for help when they returned to their car and found a carpet python hanging off the rearview mirror.

Josh Castle, director of Brisbane North Snake Catcher, said one of his reptile catchers responded when a family having a picnic north of Brisbane discovered the snake had apparently slithered into the vehicle through a window that had been left cracked open.

Castle shared photos of the unusual scene on his company’s Facebook page.

He said it was one of the more unusual places that callers have found snakes.

“I have pulled them out of car bonnets and stuff like that, which is more to be expected because they can get into a bonnet from underneath,” Castle told 7News. “The fact it was actually in the car and soaking in the sun through the window on the mirror is quite weird.”

Castle said the snake, which measured a little over 4 feet long, was safely relocated.