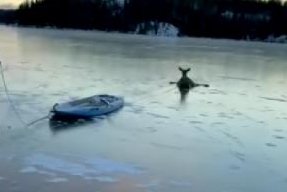 Nov. 30 (UPI) — A pair of Canadian men used a rope and a paddleboard to rescue a young deer they found stranded on the thin ice covering an Ontario lake.

Devin Bell, 31, said he was headed home when he spotted what appeared to be an animal curled up in the middle of the thin ice covering Black Sturgeon Lake, north of Kenora.

Bell said he pulled over and determined the creature was a deer stranded more than 500 yards from shore.

Bell enlisted the help of friend Johnny Neniska to help him determine whether the deer was even still alive.

The men walked across the ice with a paddleboard in tow and attempted to load the animal onto the board to pull it back to shore.

“I put the paddleboard right up to it, I was kneeling on the paddle board and I grabbed the deer to pull it on and then it came to life,” Bell told Global News. “It started freaking out and jumping all over the place and punching holes in the ice.”

He said it took about an hour to get the deer back to shore, where the animal rested for about 30 minutes before getting up to run — back toward the lake.

The two men pulled the deer further from the lake and into the nearby woods, where Bell said he later spotted tracks leading away from the ice.

Bell said he feared the deer would not survive without the help it received from the two men.

“The wolves would have grabbed her, probably as soon as the sun went down,” he said.

Deer have previously been rescued from similar predicaments on Kenora-area lakes. Ryan Peterson was ice skating on the nearby Lake of the Woods in December 2020 when he ended up lassoing and rescuing three deer stranded on the ice.