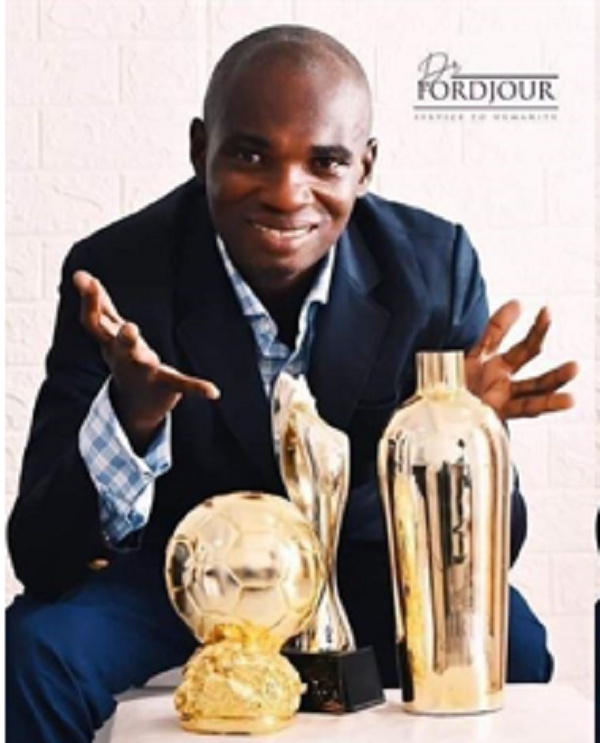 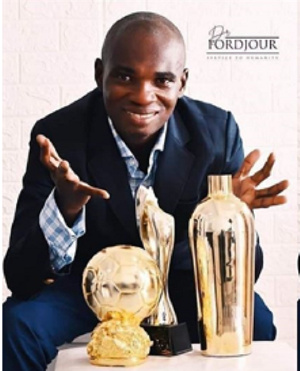 The excitement and disappointment among football fans across the globe after Bayern Munich star Robert Lewandowski lost the Ballon d’Or to Lionel Messi, took a different turn when Ghanaian tweeps likened the trophy the Polish striker received for placing second to what Dr. UN presented to some Ghanaian celebrities he honoured through his award scheme.

Looking dapper in a 3-piece shining blue suit with a black bow tie and a white pocket handkerchief to match, Lewandowski received a round and square-shaped plaque as his reward. Poking fun into the development, some tweeps in an attempt to troll Lewandowski drew a comparison between his plaque and Dr. UN’s.

Popularly known as Dr. UN, H.E. Dr. Kwame Owusu Fordjour as he prefers to be called, gained prominence after it emerged that his award scheme is not affiliated with the UN.

Prior to this, he had awarded some showbiz personalities including Sarkodie, D-Black, and Berla Mundi. Several other prominent Ghanaians including politicians and academicians were also awarded on various occasions.

After it emerged that the award scheme was ‘fake’, various awardees were trolled for ignoring credible award schemes only to receive plaques in the form of feeding bottles, plates and horses.

Resorting to pictorial comparison, some tweeps shared a collage of Dr. UN’s plaques and that of Lewandowski’s with interesting captions.

Dr. UN has since been trending on social media.

The person wey design the plaque them take give Lewa, we for investigate am. Ebe ein give Dr. Un the ideas. Because what in the satellite dish was that? ????

So Dr UN is sponsoring the ballon D’or this year

The bottle dem take give Pedri check like Dr UN en own oo anaa my eyes ????

They gave this mini dish to Lewandowski as an award

This reminds me of @sarkodie and Dr. UN https://t.co/V9fIlKajpK