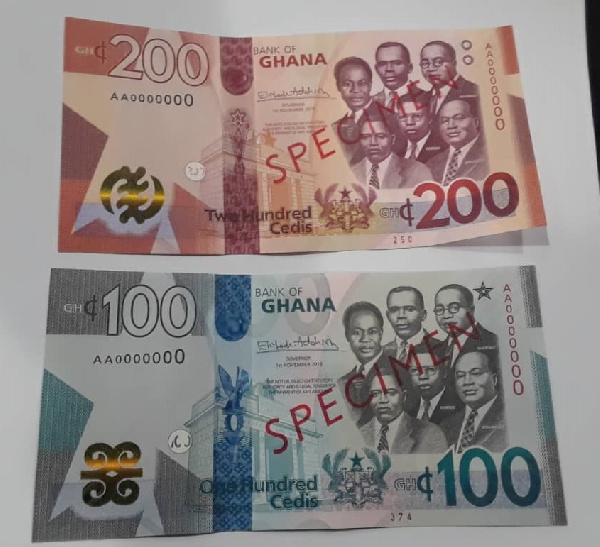 In 2018, a financial analyst, Joe Jackson, averred that the introduction of GH¢100, GH¢200 banknotes into the system was unnecessary.

He argued that these higher denominations do not add value to the local economy.

Joe Jackson continued that the release of the higher cedi notes defeats the cashless society agenda being pushed by the Akufo-Addo led government.

Read the full story originally published on November 30, 2018 by 3news.

Financial analyst, Joe Jackson, has described as unnecessary, the introduction of new high-value cedi denominations, arguing it adds no value to the economy.

The 100 and 200 cedi banknotes announced by the Bank of Ghana Friday, he said, defeats the cashless society agenda the Akufo-Addo government has been pushing.

BoG in announcing the banknotes explained the 100 and 200 cedis banknotes will ensure customer convenience and bring about efficiency in the printing of currency to generate savings for the country.

Speaking on the issue on TV3 news analysis programme, The Key Points, Saturday, Mr Jackson who is the Chief Operations Officer of Dalex said “creating new denominations is not going to do anything to the underlining parameters of the economy.”

He said the move only contradicts government’s talks of creating a cashless society with seamless use of money via digital platforms.

He said “moving towards cashless and making cash more convenient is at odds with that strategic objective we have”.

“I want to make people use less cash and more digital forms of money so why would I make cash more convenient?” Mr Jackson quizzed.

He said government should be more focused on coming up with more ways through which businesses can be transacted without physical cash, and not introduce new cedi notes.

“There is mobile money…If you want the informal sector to work it’s mobile money. Come out and tell me about how you are making mobile money more secure,” he said.

The financial analyst said the use of physical cash by informal sector business owners further draws them away from the tax system.

Contributing to the discussion, Executive Director of the Institute of Development and Economic Research, Felix Larry Esilfie, identified digital and electronic means as one of the mechanisms in expanding the informal sector.

For his part, Development Economist, Dr. George Domfeh, said although running a cashless society is a good idea, government has a lot to do in terms of educating people on some of the digital payment platforms.

“You need people to have appreciable level of education in order to appreciate the use of some of these things. Research has indicated it works best in societies where you have considerable level of education. Even though cashless is good, we cannot do it one day, it should be a process.”

Dr. Domfeh’s suggested he supports the introduction of the new banknotes because it cost less to print the 200 and 100 cedi notes.

The Dean of School of Graduate Studies at the University of Professional Studies (UPSA), Dr. Kwaku Mensah said BoG should come clear with the amount of money spent on printing the new cedi notes.