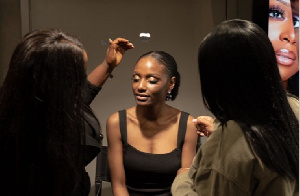 Valerie Lawson is the C.E.O of CVL Beauty

Meet Ghanaian makeup artist, beauty entrepreneur and educator Valerie Lawson, C.E.O of CVL Beauty, who made history with her special Masterclass with M.A.C Cosmetics in the UK.

Lawson, who is known for creating distinct looks for her clients, was invited by M.A.C Cosmetics and My Runway Group, a UK-based Community empowerment organization to head a special masterclass at the M.A.C flagship store in Carnaby, London, making her the first makeup artist from Africa to work with the global beauty brand in such a capacity.

“I couldn’t believe when I received the email inviting me to collaborate with M.A.C on such a huge project such as this one but I believe this is a full-circle moment for me as M.A.C inspired my journey into makeup some 10 years ago,” she said.

An award-winning MUA responsible for the Glam looks of several prominent female leaders across the world, she’s worked with the likes of Netflix CMO Ms. Bozoma St.John, Mastercard foundation boss Mrs. Reeta Roy, and the wife of the Vice-President of Ghana H.E. Mrs. Samira Bawumia.

The Special Masterclass which was held in October at the M.A.C global store in Carnaby, London offered students the opportunity to learn some important techniques and tricks from the beauty guru who is also adept in makeup for dark skin.

Classes featured lessons on skin prep, skin matching, knowledge on undertones, lash application, makeup sets. These were taught to the guests who admitted that it was a new, easy and game-changing approach to making a flawless face.

In addition to becoming the first makeup artist from Africa to chalk such a feat, Lawson’s class also broke the record for the highest number of attendees in a makeup session at M.A.C Cosmetics, Carnaby.

The store also uploaded professional work of the artist on their LED screens as part of marketing and advertising; another feat that has only been realized by the 30-year-old beauty educator.

“It feels really amazing and accomplishing to be able to represent the motherland and Africa as a whole this way”, Lawson said. “My work on their window front was the icing on the cake for me and I hope it inspires the next generation of African youth to use their talent for the greater good.”

Students from the Masterclass alluded to Lawson’s in-depth knowledge in makeup artistry and her patience in tutoring them on every step that was needed to create a flawless look.

“I enjoyed the class with Valerie and I thought it was amazing because everything was so detailed,” an attendee pointed out.