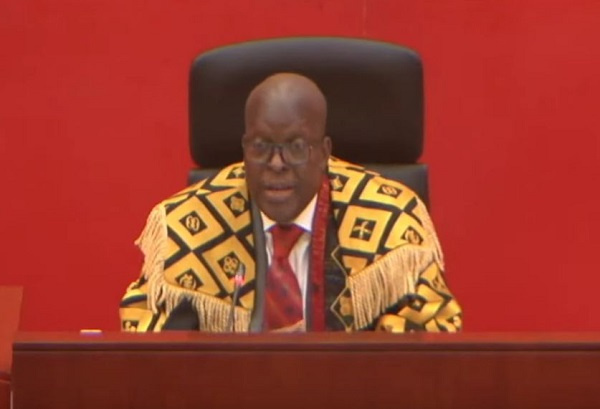 2022 budget happens to be the most progressive ever, Movement

FixingTheCountry, a group affiliated with the ruling New Patriotic Party, has slammed the Speaker of Parliament, Alban Bagbin over what they described as bias and mischief, on his part, during discussions on the 2022 budget on Friday, November 26, 2021.

The group in a statement issued on Friday, November 26, said it is disappointed in how the Speaker discharged his umpire role on Friday.

One issue the group took issues with was the barring of the Finance Minister the plenary during the voting. The group said Alban Bagbin showed “bad faith” with the order for Ken Ofori-Atta to exit the plenary.

The Fixing The Country Movement notes with great consternation and disappointment the behaviour of the Speaker of Parliament, Rt Hon Alban Bagbin in Parliament over the 2022 budget approval sitting.

Matter of factly, the Finance Minister’s presence in Parliament was with a prayer to have the opportunity to accommodate the comments made by the minority into the budget. Sadly, the same minority who made the requests and the speaker refused to allow the minister to incorporate their requests.

While refusing the minister the opportunity, the speaker went further to ask the finance minister whose budget is being debated, to leave the chamber.

Again, the Speaker chose to pose questions that required majority of the House voting in favour, constituting not less than 138 members. Article 104 of the constitution and Order 109 of the standing orders of Parliament state that the Speaker requires 138 members at least before he can put a question. He may have a quorum to take questions and statements but he needs 138 to put a question.

We view this as a troubling departure from conventions and laid down due process. It is also an attempt to undermine our democratic freedoms and rights as enshrined in the fourth Republican constitution and weaken the institution of parliament.

On this score, we deem it prudent to infer that any decision that was taken with less than 138 people in the chamber is void. We, therefore, urge the good people of Ghana to disregard the claim that the budget is rejected.

On the more substantive matter, the 2022 budget happens to be the most progressive ever.

The minority simply chose to engage in shenanigans, cat-calls and propaganda in an attempt to deny the good people of Ghana the lofty objectives that the budget primarily seeks to achieve.

In fact, Ghana’s fiscal crisis began in 2012 under Mahama, with huge pay rises offered to government employees, without a clear plan to increase government revenues in step. Between 2014 and 2016, the national wage bill increased 47%, eventually rising to consume more than 70% of tax revenues.

The reality is that the Akufo-Addo government over the last 5years has done more than enough to clean Mahama’s mess.

It, therefore, makes no sense for the minority to connive with the Speaker to attempt to derail the President’s economic policy for 2022.

As Britain’s Iron Lady, Margaret Thatcher once said, “Disciplining yourself to do what you know is right and important, although difficult, is the high road to pride, self-esteem, and personal satisfaction.”

Let the Speaker and his cohorts on the minority bench take consolation in the words of Margaret Thatcher, return to Parliament on Tuesday and do what is right and appropriate before the law.

Meanwhile, we call on the rank and file of the NPP to remain calm, resolute and unfazed.