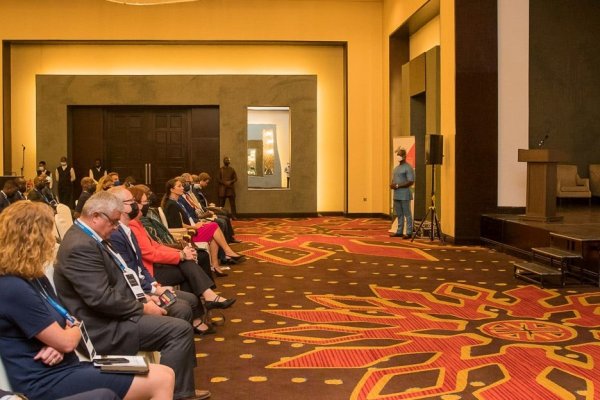 Accra, Nov 26, GNA – President Nana Addo Dankwa Akufo-Addo has urged investors in Norway to invest in Ghana, arguing that government has put in place the enabling environment for businesses to thrive in the country.

He said government had instituted a number of fiscal incentives, and created and maintained the conducive investment environment that not only protected and guaranteed the safety of investments, but good returns as well.

The President made the call when he opened the Ghana-Norway Business and Investment Forum in Accra on Friday.

The one-day forum, which brought together investors from Norway and Ghanaian industry and business leaders, will showcase the investment opportunities in Ghana, particularly in the sectors water, Health, housing Road and rail infrastructure, transport, industry, manufacturing, agriculture, petroleum and gas.

President Akufo-Addo who showcased Ghana as the best investment destination in Africa said his government had over the last four years done a lot of work to position the country’s economy on a level keel.

“We have, over the period, put in place measures needed to reduce the cost of doing business, improve the business environment, and made the Ghanaian economy not only one of the most business-friendly economies in Africa, but also one of the fastest growing economies in the world between 2017 and 2020, averaging annual GDP growth rates of 7 per cent for those years, up from the 3.4 per cent GDP growth rate we inherited from the previous government in 2016,” he said.

President Akufo-Addo told the Scandinavian investors that though the COVID-19 pandemic had ravaged economies the world over, Government was working to grow the economy at a much faster rate this year.

This, he said, “will enhance the prospects of a win-win environment for both private sector and country; an environment where companies do not just survive, but actually thrive.”

“It continues to be an exciting time to be in Ghana, and to do business in the country. Already, global car manufacturing giants, Toyota and Nissan of Japan, Sinotruk of China, have established assembly plants in the country, as first steps towards the production of vehicles in Ghana,” he said.

“Twitter is establishing its African Headquarters in Ghana, and Google’s first African Artificial Intelligence Centre is located in Ghana. We are privileged to play host to the Secretariat of the African Continental Free Trade Area, which represents, currently, a market of some 1.2 billion people, spread over fifty-four (54) countries, with a combined GDP of $3 trillion. Trading in the emerging single market began on 1st January this year”.

President Akufo-Addo said the Government was also embarking on an aggressive public private partnership programme to attract investment in the development of both road and railway infrastructure in the country.

“We are hopeful that, with solid private sector participation, we can develop a modern railway network with strong production centre linkages and with the potential to connect us to our neighbours,” he said.

The President said it was heartwarming that Ghana was witnessing a significant rise in interest from Norwegian investors, in several sectors of the economy, including agriculture, building and construction, general trading, manufacturing, oil and gas, and tourism.

“I want us together to build a stronger Ghana Norway investment relationship to the benefit of our respective shareholders. The process for grandmas and indeed Africa’s development in the 21st century are immense. Norwegian participation in that development, would be very welcome and Ghana.

“Though Ghana only opened a diplomatic in Oslo in 2018, Norway, President Akufo-Addo said had been an important contributor to Ghana’s development since the 1970s.

“Interventions from Norway, such as the, oil for development program and fish for development, which have been running successfully for more than a decade have enhanced capacity to manage the petroleum and Marine Resources of the country,” he noted.

President Akufo-Addo was optimistic that the forum would serve as a launch pad for more Dynamic engagement between the business communities of our two countries.

“I want us together to build a stronger Ghana Norway investment relationship to the benefit of our respective shareholders. The prospect for Ghana’s, and indeed Africa’s development in the 21st century are immense. Norwegian participation in that development, would be welcome in Ghana.”

He recommended some of the flagship programmes of his government to the investors, including the One District, One factory, One Village, One Dam and the programme for Planting for Food and Jobs,

According to records from the Ghana investment Promotion Center, there has been in recent times of total of 29 projects within a Foreign Direct Investment value of 175 million dollars registered from Norway.

Information Minister Kojo Oppong Nkrumah who read the speech of the Trade and Industry, Alan Kyerematen entreated Norwegian investors to take advantage of the opportunities created by the government and invest in the country.

The Minister said the government was committed to protecting the investment of Norwegean businesses and urged the investors not to hesitate to invest in Ghana.