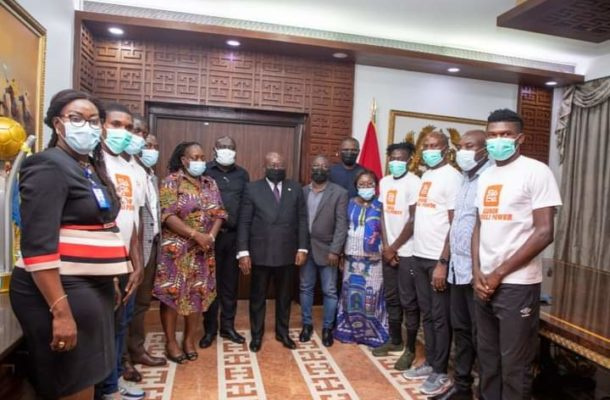 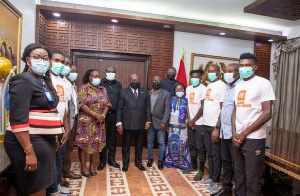 According the President many Ghanaians are now seeing the benefits of the reset that was done in Ghana football following the Anas corruption scandal but believes there is still a lot to be done to ensure the country becomes a dominant force once again which Hearts has a huge role to play.

“I’m happy that the reforms we had to undertake to sanitize Ghana football has received now general acceptance, people see it as worth doing”

“There is much more to be done in the future to bring us back to exactly where we are as the dominant football powerhouse on this continent and the dominant ones in the world but for me, that should be our goal and in attaining that goal, I know that Hearts of Oak will have a very big role to play,” he said.

The club on Tuesday afternoon paid a courtesy call on the President where they presented the two trophies that are the Ghana Premier League and the MTN FA Cup to the first gentleman of the land.

Hearts were supposed to have met the President before their 110th birthday but the meeting was called of at the eleventh hour.

Players, technical team members and the hierarchy led by Vincent Sowah Odotei were led to the presidency by the Minister for Youth and Sports Mustapha Ussif.

At the meeting, the President donated an amount of GHC1million cedis to the rainbow club in order to help them fund their CAF Confederations Cup campaign.

Hearts started in the CAF Champions League but dropped down to the CAF Confederations Cup after they were eliminated 6-2 on aggregate by Moroccan side Wydad Athletic Club.

The Ghanaian champions will play against Algerian side JS Soura in the playoff round at the Accra Sports Stadium on Sunday, November 28, 2021, before the return fixture in the North African country a week later.

This is not the time for strike – Titus Glover to drivers