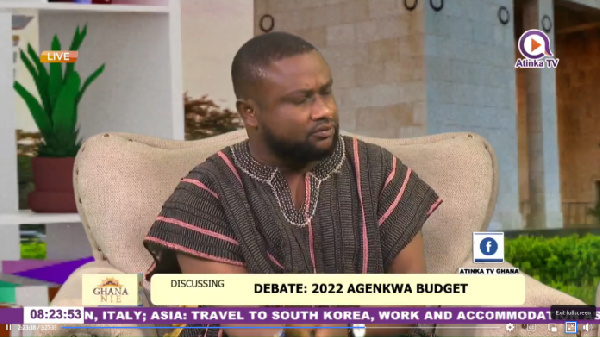 A Communication team member of the National Democratic Congress (NDC), Mr Peter Akwesi Mensah says the 2022 budget (Agyenkwa Budget) is not equitable as being portrayed by the NPP government.

The Finance Minister, Ken Ofori-Atta, reading the 2022 budget in Parliament on Wednesday 17th November 2021, said the government has decided to place a levy on all electronic transactions.

He also said the Government has suspended 50% benchmark values on selected general goods and the 30% on vehicles to make the measure more efficient and targeted.

Speaking on Atinka TV‘s morning show, Ghana Nie with Ekourba Gyasi simpremu, Mr Peter Akwesi Mensah explained that irrespective of whatever job anyone does, they will pay the 1.75% E-levy.

“The government said that it needs GH7 Billion from this tax; these taxes are not equitable as being said. Irrespective of the type of job you do, they will deduct the 1.75% and so if we are talking about equability, it does not fit in there,” he said.

He said the problem with the country is the mismanagement of the economy, saying the government does not manage the taxes well when they are collected.

Mr Peter Akwesi Mensah said if the taxes are managed well, the NPP-Government wouldn’t have introduced the above taxes.

He said the country was losing about GHC35 billion because the NPP-Government refused to manage the taxes well, saying that the government wouldn’t have introduced the 1.75% E-Levy tax if it saved the said amount.