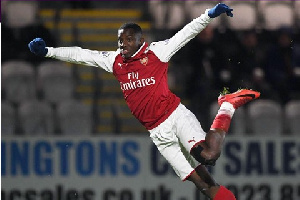 The 22-year-old contract with Arsenal will expire at the end of the season, and Palace are said to be interested in the youngster.

Nketiah’s only Arsenal minutes this season have come in the League Cup. The forward has grabbed goals against AFC Wimbledon and Leeds United in the competition.

According to Whelan, the 22-year-old would be a “great option” for Crystal Palace.

“I don’t think he will be missed at Arsenal, unfortunately for him,” he told Football Insider‘s Ewan Kingsbury.

“They’ve done a job upfront without him; he’s not contributed that much over the years – and surely he will want to move on and establish himself as a number nine elsewhere?

“There will always be competition, but I’m certain that there’s a brilliant opportunity for Nketiah at Crystal Palace. He can step into the shoes of Jordan Ayew.

“He’s at the right age. He reminds me of Jermain Defoe, the way he can get into the right place at the right time and make something happen.

“He would be a great option for Palace.”

Nketiah has started just 11 Premier League games for Arsenal since making his league debut in 2018.

The Lewisham-born striker is the record goalscorer for England’s U21 side, having netted 16 times in 17 caps.