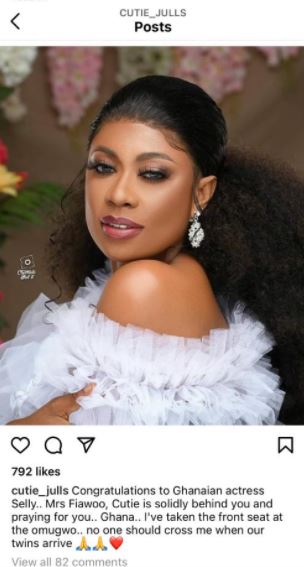 Ghanaian actress Selly Galley has joined the bandwagon of celebrities who have taken to social media to solicit funds from their penniless fans.

She follows in the steps of renowned Nigerian Afobeats star Davido who raked in more than 130 million Naira (over $300,000) in less than 24 hours after calling on his friends to send him 1 million naira each.

At first, his target was N100m when he asked his colleagues and associates to send him money to clear his Roll Royce from the Port, but he has surpassed the goal and still receiving more funds.

Taking to Instagram, the wife of Praye Tietia shared her mobile money number requesting for GHC100 funds or more, and already some persons have shown their support.

Meanwhile, Legendary Ghanaian musician Reggie Rockstone has come under backlash for “shamelessly and stylishly” begging for money in a video speaking plenty English.