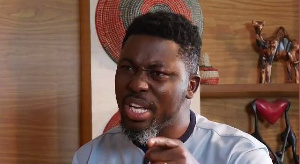 Kwame Asare Obeng also known as ‘A Plus’

Social commentator, Kwame A-Plus, has alleged that some monies are secretly being distributed at the Ministry of Tourism, Arts and Culture.

A-Plus, who appeared irritated by the supposed act, said that only some selected individuals have been invited to receive these monies, adding that he has been sidelined.

Without evidence, A-Plus mentioned that Arnold Asamoah-Baidoo was one of the persons to have been contacted to come for his share of the money, adding that the entertainment pundit declined.

He added that Arnold was invited because he was in their good books.

“Money is being shared at the creative arts ministry. The ministry is sharing money silently not for production or whatever. Nobody has ever called me to come for some of the money. One may say you’re not active but they called Arnold to come and take some of the money and he refused. Bulldog, Myself and Reggie Rockstone was not called but Arnold was called. Because he was in their good books. Okraku called Arnold to come and receive some of the money. Why haven’t they made it public that government has released some funds for the creative arts industry?

“Is the creative arts director aware that they’re sharing some money at the ministry? I’ll inform Reggie Rockstone. Unfortunately, he wasn’t at the meeting but I’m sure the question he wanted to ask, someone had already asked for him. Same goes for LilWin. They were able to ask your questions but no one called you to come for the money,” he said.

A-Plus made this known in a Facebook LIVE video.