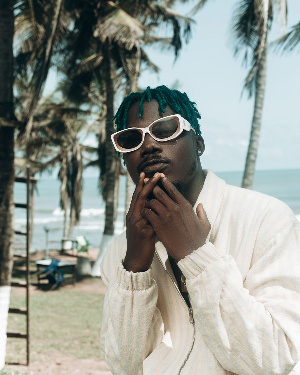 Camidoh is on the cusp of releasing his debut album, aptly titled “L.I.T.A.” Although it’s arriving in 2022, the Ghanaian breakout star is still having fun while it lasts.

On Wednesday, November 17, the multi-talented recording and performing artist shared a series of photos on his Instagram account announcing the release of his much-anticipated single “SUGAR CANE” off his debut album. The photo shoot finds the “For My Lover” hitmaker in a variety of poses, looking confident and showing his artistic ingenuity through his fashion sense at a myriad of locations.

“SUGAR CANE”, reported to premiere Friday (November 19), will feature Nigerian record producer, Phantom, and will debut as the first single off the album. The single’s announcement was accompanied by the release of the official cover art, which depicted a coloured Camidoh and his supposed lover, standing on a sugarcane.

In July, He linked up with Kwesi Arthur for his latest wedding-inspired single ‘Dance with You’. A heart-warming ballad with romance at its heart, the song sees both artistes trade smooth vocals amidst a feelgood Afropop production.

“The inspiration behind ‘Dance with You’ stems from the idea of a man and woman both really liking each other, but the woman is holding back, and the man feels as though she is playing hard to get,” Camidoh explains. “After years of this romance, eventually it blossoms, and the pair get married.”

Camidoh sat with Tirade Columnist, Gracey Mae, to share his journey so far, his source of music inspiration, in October 2021. The conversation unpacked highlights of the artiste’s journey, thus far, like being co-signed by music royalty, performing to the largest Ghanaian music audience in the diaspora, and being nominated for multiple awards, and being motivated by love.