Watch how Reggie Zippy was inconsolable at late mother’s funeral 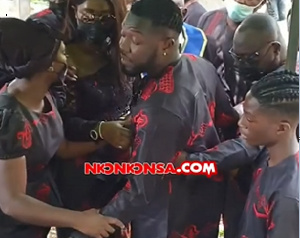 It was an extremely difficult moment for UK-based Ghanaian musician, Reggie Zippy, at a time he looked on helplessly as his mother’s casket was lowered into the grave at the Gbawe cemetery in Accra.

Reggy who appeared depressed and soaked with grief had a hard time saying goodbye to his late mother at the graveside.

The ‘Virgin’ hitmaker sang tribute songs for his late mother, knelt before her remains and screamed out in pain.

It took the intervention of several individuals including some family elders to whisk away Reggie who held on to the tomb of her mother, refusing to let go.

However, some celebrities including the likes of Gloria Sarfo, Asamoah Gyan, Ohemaa Woyeje, Lucky Mensah, Kofi Nti, Appietus, Stacey Amoateng and many others were present to commiserate with Reggie Zippy

It can be recalled that Reggie Zippy lost his mother, Madam Cecilia Koomson, who is said to have passed away on August 29, 2021, in a rather heartbreaking manner.