I held Okraku Mantey’s hands, took him to Akufo-Addo for his ministerial position – A Plus 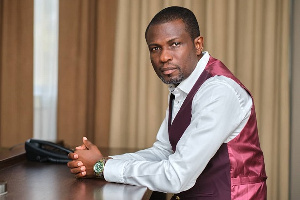 • A Plus blows his own trumpet

• IGP-creative arts meeting: I deserve some credit for holding it down, A Plus says

Social Commentator, Kwame A Plus has established that he actively lobbied for Mark Okraku Mantey to attain his Deputy creative arts minister position.

A Plus said he was the one who first introduced Mr. Okraku Mantey to President Nana Addo Dankwa Akufo-Addo and recommended him as the right candidate for the job.

He made these comments after Arnold asked why the IGP failed to pass through the creative arts minister, rather than putting A-Plus in charge of the organization of the creative arts meeting recently held between the two entities.

Arnold said A Plus wasn’t in the right capacity to handle the meeting between the creative arts industry and the police, adding that he failed to properly coordinate it.

According to Arnold, the fact that some key creative arts stakeholders were not informed about the meeting proves the hasty and shoddy manner in which it was planned.

It was in this light that A Plus who felt disrespected by Arnold’s comments, decided to share these comments;