Praising Dampare is getting sickening by the day 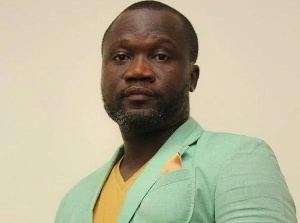 • Bring to book leaders who brandished weapons in 2020 elections

• IGP is growing fanbase of celebrities without knowing

According to the outspoken presenter, the IGP has been quiet in the recently ended 2020 general elections which turned bloody and chaotic as leaders were seen with weapons on Onua TV this week.

Ola Michaels listed top political figures who brandished weapons in broad daylight which one way or the other orchestrated violence.

He has questioned the IGP actions taken to curb the situation.

“We need to stop praising him. Dampare, it’s getting sickening by the day. Is he doing anything about the deaths that occurred during the election? There were ministers and MPs brandishing guns, not to mention shooting them.

“What has he done to address this? I’m still waiting for him to reject his salary, at which point I’ll say, ‘Yeah, there’s a new guy.’ Until then, it’s all a bit of a shambles. Now that we’re in Ghana, people will start crucifying him,” he said.

Subtly praising the IGP, he added that the IGP was doing well nonetheless Ghanaians should refrain from lavishing too much praise on him.

“When you believe you are punishing a celebrity, you are actually increasing their fan base and popularity. The IGP is doing well, but you should refrain from lavishing praise on him. He’s just doing his job. Do you get the same compliments on your work, AJ? He’s doing what he’s been paid and assigned to do”.