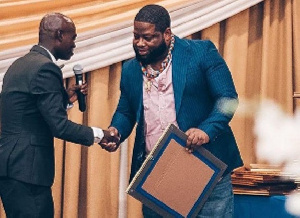 The singer who is a recipient of Dr UN’s Global Blueprint Excellence Award was told that he risks losing his title due to his lifestyle.

“As a superstar and a musician that people are looking up to you. He has discredited the honoured bestowed on him and this will attract negative comments about our awards and blame us for not doing proper assessment of him,” he said.

Read the full story originally published on September 23, 2020, on Ghanaweb

Last week, social media was filled with reports of a sex video allegedly involving Rapper D-Black and an unknown woman and this according to Dr. UN is not the kind of lifestyle expected from his honorees.

Speaking in an interview, Dr. Fordjour who is the organizer of Global Blueprint Excellence Award said “In the first place, it’s a big disgrace that we access D-Black with healthy lifestyle and he is exemplary and now this is out. It means that people have things hidden in their houses and this is not the proper way something like that would be put in public domain”.

“As a superstar and a musician that people are looking up to you. He has discredited the honoured bestowed on him and this will attract negative comments about our awards and blame us for not doing proper assessment of him”.

Dr. UN is calling on D-Black to render a public apology.

“If D-Black comes out to publicly apologize and let this entire thing go away, it will be good for him. He can be bold and say all networks should take the videos off. It has to fade so that you become the good person we know you to be”.

Asked what he and his awards scheme would do if D-Black refuses to apologize publicly, Dr. UN said “The awards committee will sit and access the situation because they have to watch and make a judgment. If he refuses to return the award then we will issue a disclaimer against and the award he received”.

Dr. Fordjour awarded D-Black with “Service to humanity award” for building talents and other high profile personalities for their contribution to society in their respective fields of endeavour on Friday, August 28, at Alisa Hotel.

Kwame Fordjour became an Internet sensation after he allegedly scammed some personalities, including, Rapper Sardokie, Berla Mundi, Nathaniel Attoh, Member of Parliament Alban Bagbin, the Vice-Chancellor of the University of Ghana, and gave them an alleged fake UN Awards.