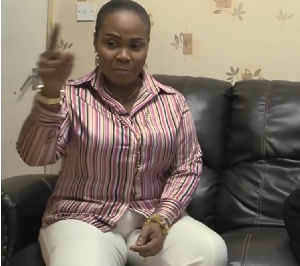 A London-based Ghanaian woman, Matilda Agyapomaa, has revealed that her ex-husband packed out of their house while she was in Ghana and married another woman the following year.

In an interview with DJ Nyaami on SVTV Africa, Matilda revealed that she has regretted getting married and presently has no plans of dating. Matilda believes that he cannot live with one person for long because “he often packs out then comes back.

“Finally, we decided to make it official. He left on July 10, July 11 he was with another woman. We broke up and wanted to marry another woman the next year. Meanwhile, we were not officially divorced,” she said.

The mother of 5 added that “I could an event here some time ago. I had a bad headache. He called one of my children and told them that I had dementia. Imagine. If I didn’t do anything for I have given you five beautiful girls.”

According to Matilda, her ex-husband brought her to Austria after being married for ten years. They lived and worked there a while before moving to Leeds.

“He told my uncle that I work too much that’s why he wants to divorce me. Meanwhile, I close at 3 pm and get at home. I never worked at night,” Matilda added.