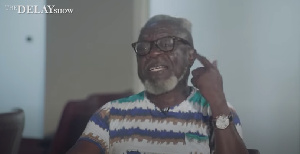 • The Kumawood actor says he has dedicated his children to God

Kumawood actor, Oboy Siki, has warned his children not to venture into the acting profession or risk being killed by him.

Oboy Siki said he will not hesitate to eliminate any of his children who will tow his career path; adding that it is not an honourable job.

According to Oboy, he has dedicated his children to God and as such, it is his wish that they will choose respectable and prominent careers for themselves.

“If any of my children try to venture into my profession I’ll kill him or her. If any of them tries, they’ll face the music. I’ve dedicated my children to God. I want them to live a good life. Although I won’t decide for them what to do, I won’t allow any of my children to tow my lane. If you are my child and you try to pursue acting, just know that I’ll kill you. I can even feed you with rat poison. It is a useless and a shameful job,” he stated

However, Oboy Siki who has on countless occasions proudly and publicly disclosed his ‘womanizing’ habit said he has been able to raise a family regardless.

“I have been married twice. The first one did not work out because it was a long distant marriage. The second one also did not last. But I have nine children with over seven women. My firstborn is dead, the one that comes after her is 43 years and my lastborn is 21-year-old.”